The sunrise in Thunder Bay was sweet! This is the view from our motel room and there is a tiny little fragment of Lake Superior visible on the horizon. 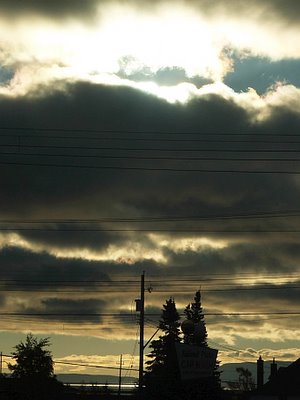 We skipped breakfast and drove straight out of the city to get to the area of the amethyst mines. The drive northeast was great because the sun was still relatively low in the sky to the east, still hovering over the lake, and it provided some cool views of the lake and silhouettes of the landscape.

This is a view of Lake Superior from a gas station. (Please ignore the crooked horizon -- I'd skipped breakfast and was feeling unbalanced.) 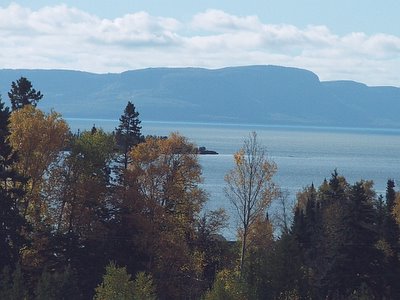 And this view is from a gift shop next door. 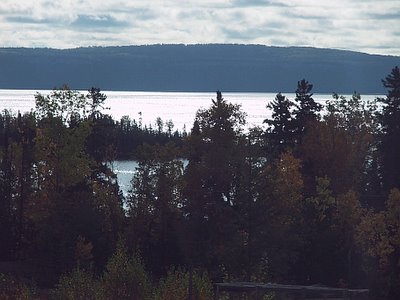 There were three amethyst mines we wanted to hit, and the first one we came to was the Amethyst Mine Panorama. Although the drive to the mine off the main highway was long and arduous, it was well worth it.

Amethyst was everywhere! Large boulders laced with amethyst divided the "in" and "out" road to the mine itself, and the ground glistened with shades of lavender and purple. Neither of us was dressed for the dirty job ahead of us, but it didn't matter. We were surrounded with amethyst!

After a tour and a lesson about amethyst, we were guided to an area that was covered in rocks that had been dug out of the mine and dumped for 50 years on these spots. The mining company dug through these piles to find specimens to sell or use, and they were the same quality we had access to. At $2 CND per pound, we grabbed a bucket and started digging.

My method was to plop (gently) myself down on a higher mound and start digging. My boyfriend grabbed a hose and rinsed sediment off of the surface rocks to find his gems. I think we both had equal luck finding ones we liked.

What we learned was that amethyst comes in shades as light as lavender and as dark as black with red speckles. It's made up of quartz that has varying amounts of iron in it, and the darker the stone, the more iron that's present. Amethyst is a 6-sided crystal, and some very coveted pieces are the 6-sided tips, though the color preference of the crystals is really a personal choice. We found a few tips, many deep purple shards, some fantastic rocks with visible purple veins of amethyst running through them, and a couple pieces of rock with the crystals growing up from the top, with many complete crystals in all their glory. 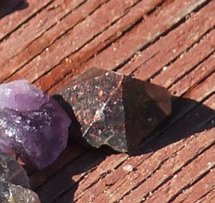 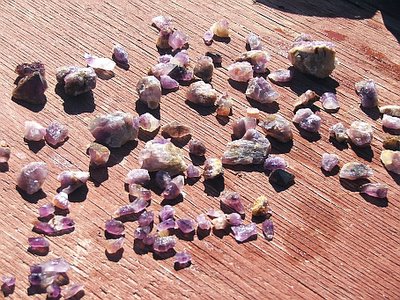 On display in the middle of the tour area was a wall of rock that was masoned like brick, with gorgeous amethyst as the stone of honor. 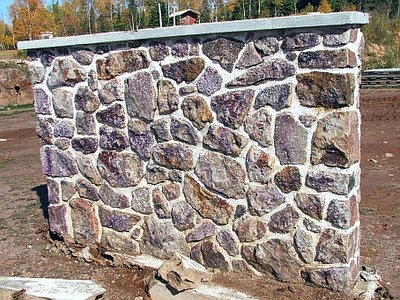 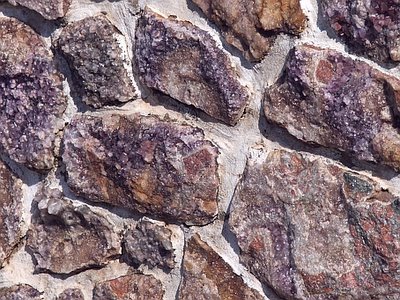 Oh what I would give to have a fireplace of amethyst like this!

The sun was out, the weather was nice, and time flew so fast that we didn't even realize it was 2 PM until, of course, I had to go to the bathroom and couldn't hold it any longer. Three hours of digging through rubble and we collected a nice 2-pound bucket full of purple heaven.

Have I mentioned that amethyst is my boyfriend's favorite? Up until that point, he'd referred to this trip as a once-in-a-lifetime trip. After the amethyst mine, he was now saying we needed to do this again next year or in the spring. Heh, heh, heh -- it wasn't such a strange idea to drive around the lake after all!

So, for about $10 CND (two $3 admission fees and $4 for the amethyst we mined), which is about $8.50 USD, we had three hours of fun, saw more amethyst than most will in a lifetime, and I even had a nasty mining blister to prove what hard work it was. Oh, and if anyone is thinking of trying this, do NOT sit on the ground while digging unless you bring some kind of cushion, because recently mined rocks are sharp, painful, and capable of tearing giant holes in even jeans.

After our long-ish time spent in the first mine, we decided to skip the other two and head to our next destination.

The road back to the highway provided some really gorgeous views as well. That's Lake Superior in the distance, by the way. 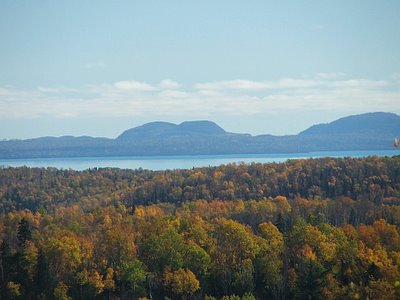 Once again, the trees of gold and green were everywhere. 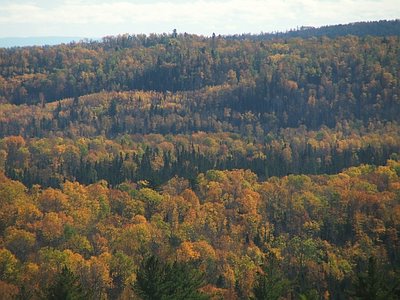 Lake Superior on the north shore is unlike anything I've ever seen. The rocky shores, the crags and hills, the ancient remains of mountains that are estimated to have been as high as the Andes, and the rich forests that carpet the landscape are breathtaking.

This is a view from a small wayside, overlooking Nipigon, Ontario. 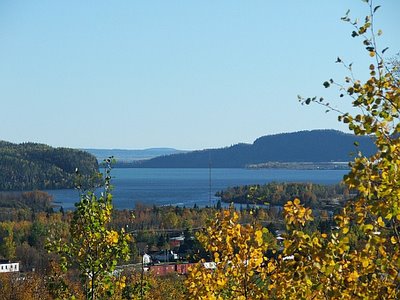 Driving across the Canada shore of Lake Superior looks like this. 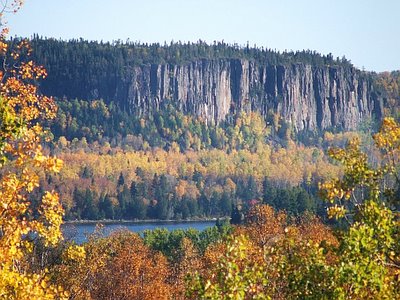 Around every corner is an inland lake that has no human presence anywhere near it and appears utterly untouched, while on the other side is Lake Superior, seen from higher up on the hillsides that the road climbs and winds around. 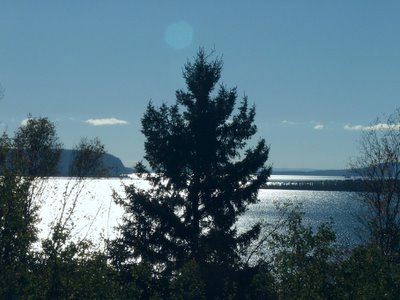 I swear, you'll be driving along with forests on both sides of the road, and then you'll come around a turn and suddenly this is your view. 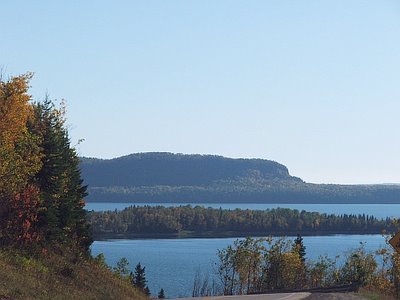 We noticed a wayside in Rossport and immediately pulled over. As the sun was nearing the horizon at the end of the afternoon, Rossport just lit up with beauty. 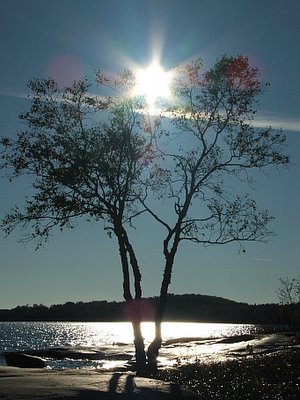 The waves softly splashed the rocks on the shore, which were worn smooth from it. 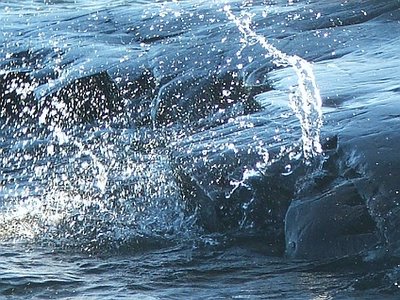 Here I found handfuls and pocketfuls of beautiful granite, which caused me to refer to Rossport as Rockport. It takes effort for me to call it by the correct name now, as I will inevitably connect it to the vast amounts of beautifully plain rocks I couldn't get enough of.

It was at this point that we decided that our day of travel would have to come to a close very soon. The plan was to drive to Wawa, but it was looking like Marathon would be our unexpected stop for the night. This meant we'd be able to visit White River in the morning instead of missing the home of Winnie the Pooh due to the fading light.

Marathon was a surprisingly quaint town. We found a very cheap motel room on the edge of town and my boyfriend and I fell in love with the manager's dog. Clearly this dog had some husky in his blood, but according to the owner, he got her from a nearby reservation, where a female dog (what he referred to as a plain, "reservation dog") got out, got pregnant by something in the woods, and had this litter of puppies. I wish I had pictures of this dog! She HAD to be half coyote! And she never ever barked, ever. He showed us a photo of the dog when she was a puppy, and this dog looked like a bobble-head toy. She was 90% head! It was hilarious, but she was a terrific dog.

The room was a cinderblock cell painted yellow. My first discovery was that there was no alarm clock. While my boyfriend walked to the office to get toilet paper (which had not been stocked by the cleaning crew -- not a good sign), I searched the room high and low for a clock. When it was clear that an alarm clock was not an included amenity, I grabbed the phone to call for a wake-up call in the morning. There was a phone, but the phone line was gone! I moved furniture, followed all the cords and lines, but no phone cord was in the room. When my boyfriend came back, I told him the crisis and he chuckled, said the owner had some battle with the phone company and removed all the lines to the rooms. Okay, but how will we get up on time the next morning? While I stressed, he tried to calm me down, to no avail. Instead we went to dinner.

I had the most incredible dinner at The Prime Cut restaurant in Marathon! To spoil myself in my freaked out state, I ordered a half slab of honey garlic ribs. OH MY GOD, that was so good! I am a connoisseur of rib recipes that don't include BBQ sauce, and I'm finding some great ones out there. This one I'd pay big bucks to get my hands on.

Marathon was a nice town, raised above the lake but a fantastic spot to watch the sunset. 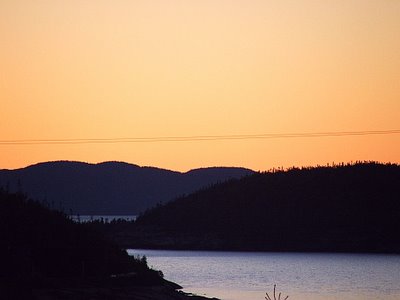 Once back at the room, we discovered that there was a way to program the television to come on at a certain time, which provided me with the security of an alarm to wake up with, because I knew I wouldn't be able to sleep without it. Thankfully, I got a good night of sleep after such a full, great day.

Posted by Doggie Extraordinaire's Mom at 2:23 AM