Monday morning we woke up, and after watching The Weather Channel for an hour or so (which is an addiction of mine), we had a fantastic brunch at a local cafe, and headed up Black River Road.

What a gorgeous drive! It looked like this all the way to Lake Superior. 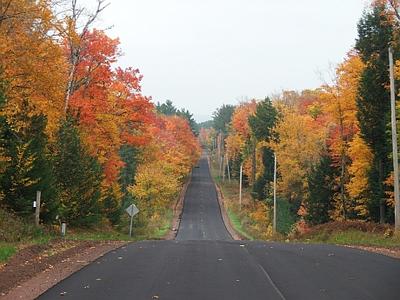 The Black River is on the western edge of the Porcupine Mountains, riddled with waterfalls and old growth trees. Due to the topography, trees in this area have never been harvested and they stand taller and larger than most others in the region. It's fabulous to stand amongst these trees! Only one other area in the Upper Peninsula can boast old growth trees, and that's the Tahquamenon Falls State Park.

Color was ripe on most trees except those closest to the water. 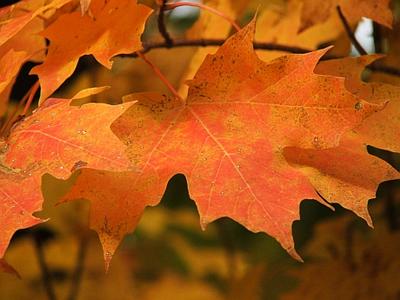 We stopped at Potawatomi and Gorge Falls on the way to the shore, and were blown away by the sight! Below is Potawatomi Falls. 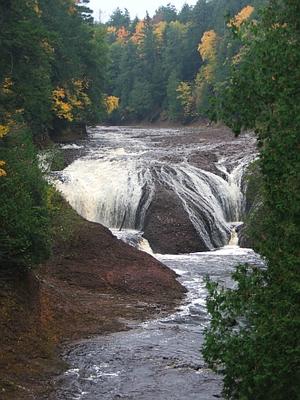 The river widens and pours over bumpy rocks that give it a look of kinky white hair. 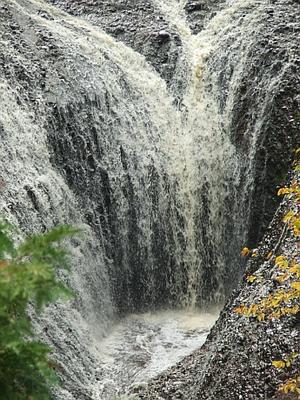 At the river mouth, there is a bridge suspended across the width of the river, which proved very photogenic. 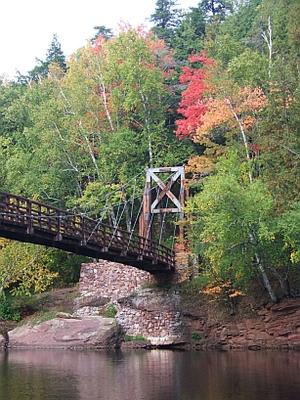 You can see in the photos that the Black River is indeed very dark, and by the time you reach the mouth of the river, you cannot see the riverbed if the water is more than a foot deep. The darkness is from the tannin in the pine trees, which dyes the water a deep, dark brown.

One of my favorite sights in autumn is the bright redness of sumac leaves. I'm overjoyed when I can catch one in varying degrees of redness like the one below. 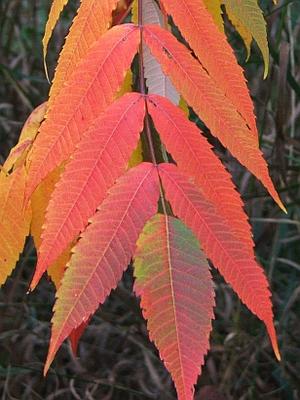 From there we visited Ironwood, home of the world's talles Indian. A 52-foot-tall, fiberglass Indian stands on the edge of the business district in this strange town. Here is my boyfriend sitting on his moccasin, which creates scale. Why a gigantic Indian? I still can't figure that one out. 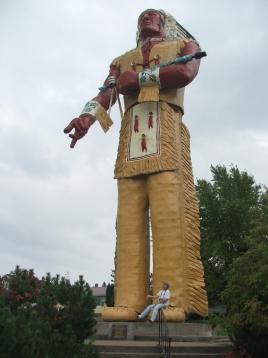 Twisted girl that I am, I couldn't resist taking this picture up the backside of the Indian. Oh, you know you would do it too! 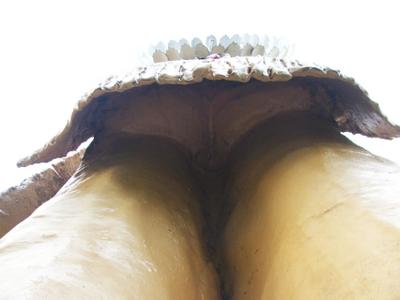 We drove out of Michigan and into Wisconsin from there, only to end up back in Michigan to see Superior Falls.

Superior Falls on the Montreal River is beautiful, but tricky. The area is owned by Wisconsin Electric Power, who controls the flow of the river and access to the surrounding land, so it's not exactly tourist friendly. There is a worn path with a chain-link fence that leads from a parking area to a viewing area. What's very unexpected is the height you're at to view the falls -- you stand 100 feet up from the river at the edge of a sheer cliff, seeing the falls in the distance. The river water drops some 40+ feet from a pool above into the flowing river that goes on to join Lake Superior a few hundred yards away. It's stunning, if not dizzying to find yourself on this precipice and the dwarfed falls ahead. 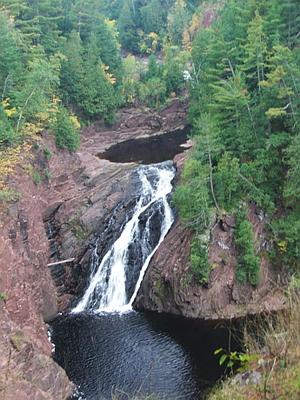 I should mention that it was 80º again that day and I'd been running around in shorts all day, sometimes too warm for comfort. However, that all changed rapidly from the moment we left Superior Falls. The drive to Ashland was increasingly ominous as a large storm blew in, which would impact the Lake Superior area dramatically for a long time to come.

While in Ashland, we stayed at (what I consider) an overpriced and sad Super 8. I much prefer the mom 'n' pop style motels, which for some reason feel more inviting. However, we had an incredible meal at The Deep Water Grille & South Shore Brewery. I had the shaved prime rib sandwich, which stands as the best sandwich I've ever had! If you're ever in Ashland, Wisconsin, stop here!

Though we had a busy day and were worn out, the hurricane force winds and driving rain kept us a bit electric into the night as we watched more reruns of Law and Order on TV (alternating with The Weather Channel) and were grateful for the large building to protect us from the dangerous elements outside. Losing power was a threat, but it didn't happen. We did sleep well, though, thanks to the soothing sound of the rain.

Posted by Doggie Extraordinaire's Mom at 2:29 AM

WOW these pics of MI are breath taking. I have a friend who used to live in AZ and moved to MI when she got married and will never come back to AZ after living in MI. She LOVES it there and has sent me camping pics and now after seeing that picture of the fall leaves with that one road I'm hooked!!! How gorgeous.
Looks like you had an awesome time:)