Perhaps due to the first warm night we'd had in a few days, or maybe the unexpected quietness our neighbors displayed in the early morning, but something left us so well-rested and comfortable that we overslept a bit. Once we got our stagnant butts moving, we found that breakfast at The Pie Place was one of the best breakfasts we've each ever had. I had the caribou eyes (a first for me, and NO, it's not the eyes of a real caribou) and a cheesy hashbrown pie. Though the idea of having a slice of pie with breakfast was appealing, we were far too full to try it. Much regrets. They have a reputation for divine pie.

First thing on the agenda was backtracking to the shore just south of Grand Marais to go rock hunting. We were now in the land of thomsonite! (If you didn't click on that link and get a glimpse of that stone, you really should, because it's the coolest thing!) Though my rock guide for Lake Superior listed this area and Ireland as the soul sources for thomsonite, with Grand Marais having the only pink and green, I've read on other websites that there are a few more places that do have thomsonite, so I don't know who to believe. Regardless, it's the coolest thing to find something so rare and I was on a hunt.

Bundled up nice and warm, we started scouring the zillions of rocks along the shore, which were all haphazardly tossed by the strong waves from the storms of the past week. It was a goldmine for chunks of agate, which we found quite a bit of, and I swear, without having a geologist confirm it, I think I have a few pieces of thomsonite! They're about ¼-inch big, but they're definitely green and pink, unlike the granite and sandstone that is prevalent, resembling more of a quartz type of translucence. Very cool if they are! Very cool if they're not, too. I do love my rocks, no matter what they are made of.

We spent a good chunk of time there until my bladder was bursting (which always ushers us on to a new destination, for I will not squat in the woods), and we drove on to Grand Portage, Minnesota.

Having missed most of the scenery of the North Shore, Grand Portage (an Indian reservation) looked about as beautiful as anything my eyes had ever seen. The hills were enormous, covered in evergreens and yellow birch, maple and aspen. The neverending sight of green and yellow, all along the roadway, going up and down the towering hills was just spectacular.

We stopped at a casino, just to peek in and there was a large sign on the door that announced that guns and weapons were forbidden. Hmmm -- it felt suddenly like we were down south. At the marina, we were blessed with a small peninsula to look out on the lake and surrounding landscape, which was stunning. I'd love to live in one of the houses at the bottom of this hill! 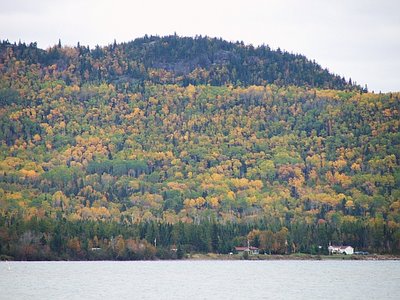 While I did expect to see Indians in Duluth or Bayfield, I didn't, and here we were in Grand Portage, which I didn't know was a reservation until we saw the sign, I found myself staring with glee at the real Indians. Not some politically correct Native Americans -- which I'm told they hate and would rather be called "Indians," and who can blame them? I'm not talking about some lame, Hollywood actor with a spray on bronze and a long braid wig. Of all the cultures in all the world, that of the Indian is most engrossing to me. While we learned about the Indians in school (and very little in my area), their attempted extermination is not referred to as a holocaust or genocide, though it really was. The more I learn about the little freedoms they have with our country and government, the more bitter I feel about the whole thing. However, I have to say, if all the reservations look as beautiful as Grand Portage, they at least have that.

I read some fascinating facts about the Indians in and around Duluth; they have their own tribal license plates, and don't have to have the ones belonging to the state orbenefitedd by the government. Also, whenever land on the shore of Lake Superior becomes available for sale, they often try to buy it, to preserve the lake and take back what we have destroyed. It just makes me wonder how different things would be if they ran the show. So, visiting a reservation was an honor for me.

Just driving through it was great. Look at the typical view we had on the road. 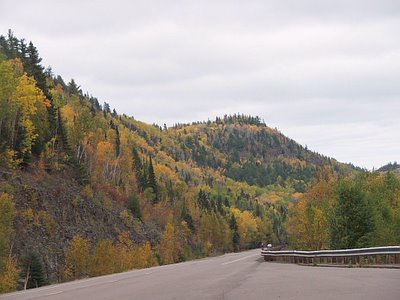 Everywhere the eye could see was this! 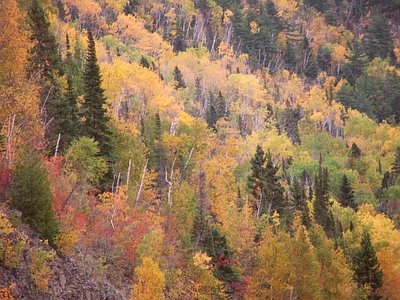 We stopped at a tiny little gallery, where an Indian artisan had set up shop, displaying her beading work. We spoke with her at length, and she did a terrific job of explaining the different style stitches she used, some taught by her grandmother and some new ones. I bought a beaded bracelet, which I love, but it's too big for my wrist, so I'm looking for a way to make it smaller.

Reaching the Canadian border was a scary thing. We'd been warned and were terrified we wouldn't be able to get in because my boyfriend didn't have his birth certificate or other proof of birthplace. It was a constant fear we swallowed and didn't talk about much. The idea of having to turn back and miss Canada was too devastating to consider, so when we reached the border, I was on the verge of a breakdown. The stoic woman manning the booth at the border asked for identification, which we had, and she asked why we wanted to visit Canada and for how long. I tried to be as friendly and perky as possible, to come across as a harmless piece of dust on an unusedknickknackk, which must have worked because she waved us through without hesitation! We were in Canada! Yay!

We stopped immediately at the tourist center once across the border, if just to catch our breath and celebrate our entry. The young guy working inside gave us all kinds of brochures for the Thunder Bay area and some hotel suggestions as well. But what I really wanted to know was, had he seen any moose. He admitted that though the signs are everywhere and the warnings are intense, he'd not yet seen a moose in his entire time working for the tourist center. Shucks! If the locals aren't seeing them, the odds are not good that we will either!

The drive to Thunder Bay was every bit as gorgeous as the drive through Grand Portage, seeming to be just a continuation of the splendor. The Sawtooth Mountains are so awesome in the fall, I can't imagine how much of a thrill it would be for the locals when the colors start to show. What a show! We did notice that the color change included only yellow. No red or orange around. It turns out that this is typical of the region all the way around the north side of the lake. Interesting fact that I'll have to research more when I have an opportunity.

We found a cheap room in Thunder Bay, right in the heart of the city, grabbed a fairly poor meal at a fast food Mexican restaurant and some reduced-price donuts at a local shop (because it was after 6 PM and they are two for the price of one). The food would disappear quickly that night, but the donuts, since we bought a dozen and got a dozen free, would rattle in my backseat and disgust me for the remainder of the trip.

The night was quiet and we really enjoyed our room. Sometimes the price does not indicate quality!

Posted by Doggie Extraordinaire's Mom at 2:24 AM