Sault Ste. Marie, Michigan is so cute! We had a quick breakfast at the Lock View Restaurant and then had another look at the locks, where another boat was being raised and sent to Lake Superior. It's much more fun at night, I must say.

The shops in town are too cool. I walked up and down the street, going in gift shop after gift shop, much to my boyfriend's boredom. He kept picking out things for me like a pale blue cotton cardigan with various lighthouses ironed-on the entire thing. Of course I'd laugh, say that was an old-lady-sweater and he'd argue and say it was right up my alley. So, when we got to the "younger" shops, I found some flamingly bright, furry, exaggerated pimp's hat for him and told him that was right up his alley. He tried it on and you know what? I was wrong.

We played for far too long at the gift shops and when we finally hit the road for our next destination, it was into the mid-afternoon already. To make matters worse, I miscalculated how long it would take to get to Paradise, Michigan and when we arrived in town, sunlight was fading fast. As quickly as we could go, I drove up to Whitefish Point because we absolutely had to see the Shipwreck Museum and the Bird Observatory.

The Great Lakes Shipwreck Museum is pricey, but really something. Of course, I'm a total sap for this stuff anyway.

Inside the main museum are stories, displays, recovered items from shipwrecks, and a large fresnel lens in tribute to the lighthouse keepers who gave so much. 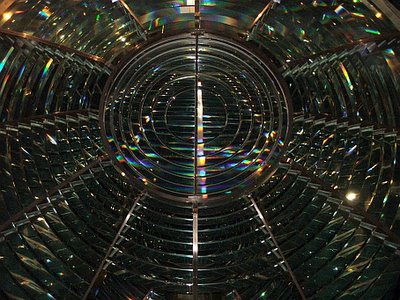 As I read the stories of the collisions, the explosions, the ships that went down, the lives that were lost, the efforts to save as many people as possible, and looked at the recovered remnants of the sunken ships, that damn "Edmond Fitzgerald" song by Gordon Lightfoot was played and I found myself in tears. Trying hard not to be the only idiot in a museum crying, I sucked it up, tuned out the song, and continued reading. With a quivering chin and trying hard not to make eye contact with anyone (so I could hide the wells of tears that my eyelids had become), I slowly made my way around the room. It was so sad. 6,000 ships have gone down on the Great Lakes and 30,000 people have died in those shipwrecks! The stories were terrible! The heroism gave me chills. It was deeply moving and I am tearing up right now just thinking back on it. So, on to brighter stories!

Whitefish Point Light Station is a strange lighthouse, with a weird skeleton-like structure. 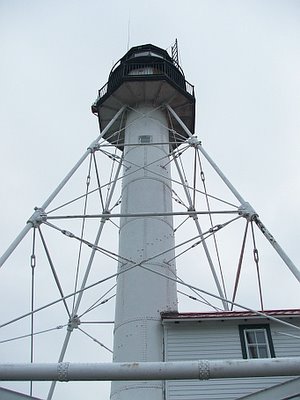 I'm not one of those lighthouse fanatics, but I do find the buildings interesting and the history equally so. The buildings are so old and the lifestyle so obsolete, but they remain a tribute to the keepers and mariners of ages past. Only now, I think of the lives they saved and the lives that were lost to have one necessary, and they are more meaningful to me. Although, I'm a bit of a lover of old buildings, no matter what their purpose was. 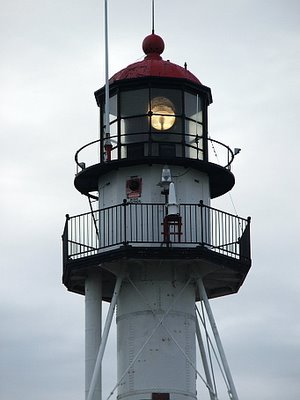 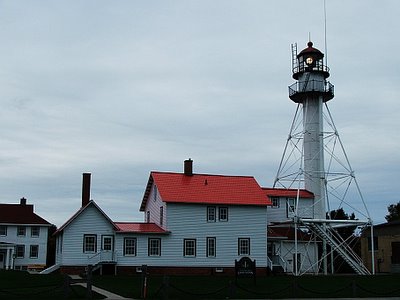 We visited the shoreline, which was so covered in rocks that I knew we'd spend hours and hours there if we got started, so I suggested we find a room for the night. First we stopped in the Bird Observatory, which was fascinating with all their bird spottings and the cutsey little gift shop. Then we headed back into town to find a place to stay in Paradise.

Given that it was Paradise and it was right on the shore, we thought it would be cool to have a cabin instead of a motel room, provided it was reasonably priced. After stopping in a few on the southward bound road, we found The Birchwood Lodges, right in town for $60 and right by the shore, secluded from the road. It was perfect! Why on earth would we pay $45-$50 for a motel room when a cabin was available for a tiny bit more? So, we stayed in our first cabin and it was terrific! Look how cute! 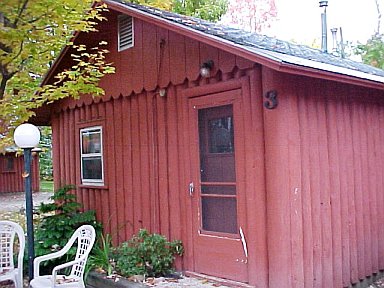 (Photo taken by My Boyfriend.)

For dinner we stopped at a local restaurant and I ordered a buffalo burger. Back home, buffalo burgers have long been a favorite of mine and I will admit, my eyes light up and if I had a tail and long ears, they would wag and perk up respectively. They're a favorite of mine, and I expected it to be equally good here. I was mistaken. Clearly they were frozen patties that had been frozen for almost as long as I'd been alive, and it tasted like it had been microwaved instead of fried or grilled. Not very good.

We went back to the room and talked of bears and moose most of the night, though I was truly scared my boyfriend would get attacked when he went to check for Northern Lights after 10 PM. At one point we heard some very strange noises from behind our cabin, something that sounded like an animal in the moose family, but it was too dark to see anything. We were probably more likely to spot a bear than a moose this far east, but we were still hopeful. And scared.

The rest of the night was quiet and peaceful, and we slept well in the secluded cabin by the shore.

Posted by Doggie Extraordinaire's Mom at 2:20 AM