When we got up, there were stories of floods all over the Bayfield Peninsula. Roads were washed out and travel was dubious at best. We ate a fantastic breakfast at The Egg Toss Cafe. Well, I did. My boyfriend got boring oatmeal. Who eats oatmeal at a restaurant when you're on vacation? It boggled my mind!

Then we shopped and picked up some goodies, bid the Apostle Islands adieu, and headed up and around the tip of the peninsula. (With regret, we were unable to take the Apostle Island cruise, due to the weather.)

There are a few towns along the way that are tiny and quaint, with little more than a gas station, bar, gift shop and church. Cornucopia was partially submerged and the park along Lake Superior was a flooded mess. Herbster provided us with a fantastic little gift and craft store, where we spent a lot of time warming up and escaping from the still-driving rain. The kind older woman who owned it not only gave us a tour, but told us all the artists' information, history and details about their products. What a personal touch! I spent a lot of my Souvenirs Budget in that store!

From there we drove a short distance to the turnoff for Twin Falls. This photo won the grand price at lakesuperior.com's online contest, and inspired me to visit the falls. Look at that soft trickle.

Due to the heavy rains and floods, we were unable to take the lower trail to see the falls -- it was under rushing water. Instead we were left with an overhead view and a remarkable difference from what I expected. 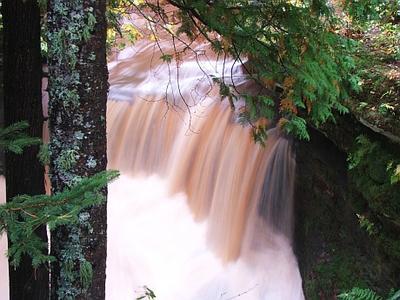 The destination was Superior, Wisconsin for the night, and we were unsure if the path to Superior would be clear, as there were many sections of the road where we drove through high water that was flowing over the road with currents!

On a whim, I turned the car when I saw a sign for Amnicon Falls, and we drove a bit out of the way for a falls I hadn't put on the itinerary or researched. When we got there, we were, again, overwhelmed with what we saw.

This falls is normally a calm flow of water, which allows swimming in the pools and walking on the rocks at the riverbed. According to the park ranger, only one other time had the water risen this high and been flowing so violently, so we were definitely seeing it in an unusual state. 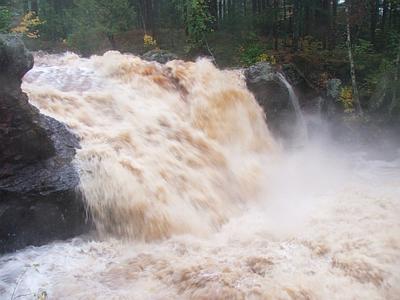 He also recommended we take a peek behind the outhouses adjoining the parking lot, to see a small section of the falls that is not something he even bothers telling folks about because it's so small and insignificant. What a sight! 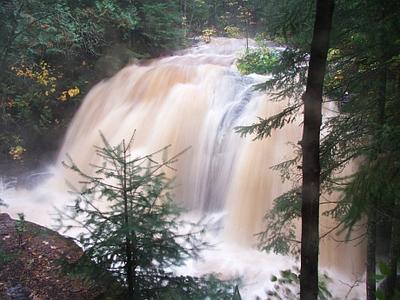 From a bit downstream, the covered bridge, a signature view, is surrounded with mist tossed high from the splashing falls. 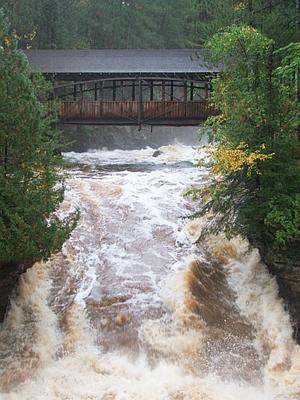 What luck that we caught it at such a time!

Parting from this area was difficult, but we had a destination to hit.

On the way to Superior, we stopped at Wisconsin Point to see world's longest freshwater sandbar, which is comprised of Wisconsin Point and Minnesota Point. At the tip of the Wisconsin side, Wisconsin Point Lighthouse stands solidly. The storm was still tearing up the area and throwing 10- to 15-foot waves up the shoreline, so the lighthouse was taking a beating. Some fool person had walked all the way out to the lighthouse for photos, and I was astonished when waves crashed around him that were taller than him. Not me! The safety of the shore was where I belonged. Yet, his presence drove home the danger of position the lighthouse was in. 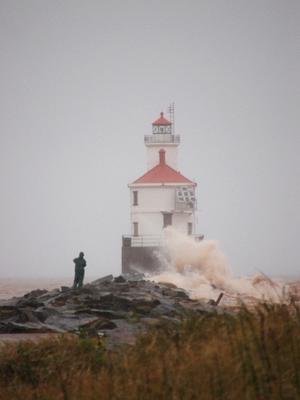 It was so cold and the wind was so harsh that we spent little time enjoying the view and quickly scurried back to the car and drove into Superior to find a room for the night. What we found was a dirt cheap room in a motel near the downtown area, and then made our way to, quite possibly, the best Mexican restaurant on the Lake Superior Area. Guadalajara Restaurant was delicious and authentic -- utterly improbable considering the area.

We returned to the room to discover that the heat was not working. Much to our horror, the motel office was closed and no aid was available. Wearing extra clothes and covered in tons of blankets, we snuggled into bed for the night, watching The Weather Channel and the freezing temperature in the forecast. They warned of snow for Duluth and The North Shore, which we shuddered thinking of. Was it really just two days ago that I was wearing shorts and complaining of the heat?
Posted by Doggie Extraordinaire's Mom at 2:27 AM