The only thing that would get me out of bed after a difficult night of sleep is the promise of the world's best french toast!

The West Bay Diner in Grand Marais, Michigan has the best breakfast in the world. The french toast alone is worth the trip, but if you're lucky to arrive on a day when they're serving the breakfast buffet, you can expect a cornucopia of pleasures that will make you wish you could tuck the leftovers away in a pocket and munch on them the rest of the day, as you stomach slowly clears away all the food you forced into it earlier. The blueberry pancakes are legendary, as are the homemade waffles. The bacon is thick and crispy, and the eggs are fluffier than any I've ever had. American fries, sausage, and muffins, bread and cinnamon rolls made from scratch, so fresh they hurt your taste buds, all available for you to eat until you can't eat another bite. But the french toast is what I go for. The french toast, made with their homemade bread, sprinkled with cinnamon, with an entire egg cracked on one side of a single slice of bread as it cooks, is just more than my pathetic words can describe. It's the best. Hands down. The best in the world.

We arrived on a Saturday when the buffet was not offered, so we had our favorite -- french toast. Mmmmmmmmmm.

Bursting at the seams, we got into the car and headed back down H-58 toward Munising, with the intention of rock hunting on Twelve Mile Beach for a good chunk of the day. The wind was still vicious, but we were determined to find rocks!

H-58 is a rough road, and only the truly brave should tackle it without Dramamine. The potholes are enormous and it is a widely traveled road by the logging trucks. A vast length of it is not maintained, and though it's plenty wide and has very little traffic, you cannot go more than 20 mph in most areas due to the gullies and holes that will swallow up a tire or wreck an undercarriage. I've driven the length of 58 many times, and without fail, every passenger who rides with me falls asleep. This is certainly not because it's smooth. Closing your eyes is an instinct to avoid motion sickness, and sometimes the slow pace and extreme bumps will have a bizarre lulling and rocking effect. Coupled with closed eyes, this knocks people right out. It's uncanny.

While we made many stops along 58 from Grand Marais to Munising, my boyfriend did fall fast asleep after the half-way point. He claims this was because he had a headache and wasn't feeling well, but I know it was because of 58.

We stopped again at Hurricane River, and the waves were so tremendous, we didn't stay too long. The incredible wind was blowing at hurricane force again and it was difficult to even see through our incessantly watering eyes. Though it was probably in the lower 50s, the 80 mph winds coming straight off the lake, sometimes bringing spray from the violent waves, made it feel like -10º. Despite the wind and cold, the sights were still gorgeous. 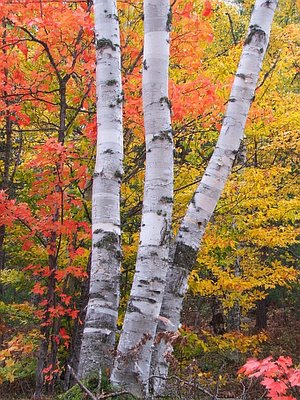 We went south toward Twelve Mile Beach, and this is what the road looked like. Things were really colorful around Munising. 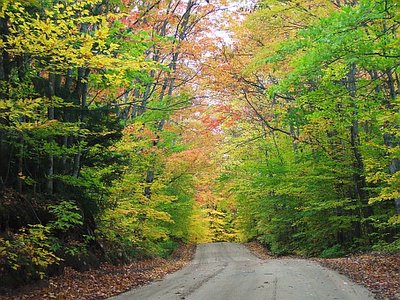 H-58 is one of the most scenic roads in the world, and in the fall, it's even more so. 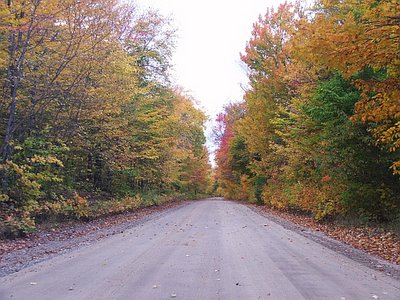 Twelve Mile beach is usually covered in rocks, but for some reason, maybe the wind and the rising lake level, the beach was nothing but sand. Truly, only sand. And just last year it looked like this. 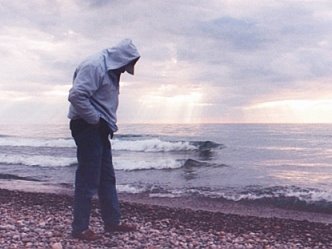 Without wanting to waste our limited time remaining, we headed straight for Miners Beach, where we hoped more rocks would be available for the picking.

First we had to stop at the Miners Castle lookout point again, to see the waves crashing into it. The wind was so strong that I didn't feel steady on my feet and wouldn't do much exploring high atop the cliff overlooking this rocky and treacherous shore, despite how safe it was. 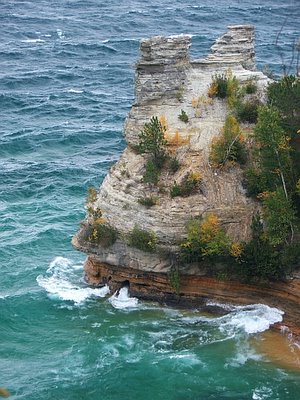 I'm always mesmerized by the water crashing through the porthole in the bottom of Miners Castle. The water is Caribbeann green, as it is in so many areas of Lake Superior, and it shoots out like a blowhole with the waves. 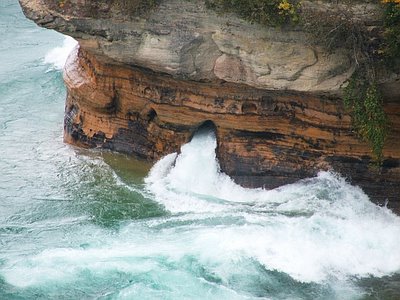 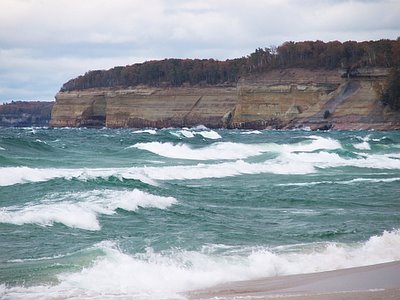 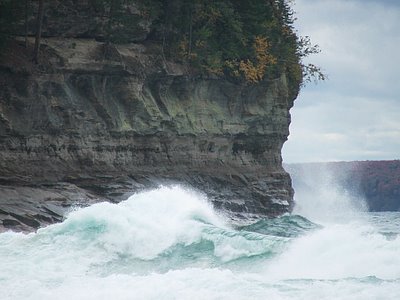 Again, there were no rocks at Miners Beach. Someone stole all of the rocks around Munising's! And it wasn't me!

As we stood on the peaceful shore watching the waves slam into the rocks and crash into the sand, we noticed a dry looking sandbar that extended far to the end and guided the river into the lake. It appeared safe enough. We walked over and watched more waves crash into the sand, careful to stay back a bit because the water was frigid and the undertow was mean! After time had passed and the waves were all pounding the shore at a distance, we let our guard down and wandered the other end of the sand bar, near the river. My boyfriend and I seemed to look back at the same time to see a giant rogue wave heading for us. It crashed high into the sand and the furious water spread across the sandbar toward us. We both panicked and took off running toward the land, away from the sandbar, with the water fast on our heels. (It is very hard to run in wet sand when you're freezing and the wind is so fierce that your eyes are barely even open.) Every time we looked back, the water was still coming. We probably ran 40-50 feet before we were out of harms way, and laughing the entire time at the crazy stupid luck we had.

After being attacked by the wave, we stood around for a bit to see if any of the other photographers and visitors would be attacked by a rogue wave like we were. Didn't happen. We waited and waited. Water never approached the sandbar again. Photographers daringly walked the entire length of the sand to the corner where the river mouth began, way too far to escape another wave if it came. It never came. We were lucky to have avoided being nailed with it, but unlucky enough to have been there at the exact moment it hit. Eesh!

Without any rocks to pick, we walked back up the trail. One of the often overlooked traits of this area is the old growth pines that tower above you as far as the eye can see. I believe these are red pines, which are some of the tallest trees in the forest here. 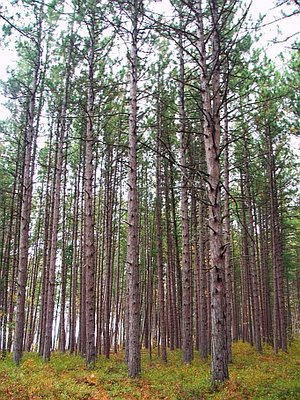 I have met many a chipmunk that coyly played peek-a-boo with me in this very area.

Disappointed in the lack of rocks, we headed farther down H-58 into Munising for our last night of vacation. It was deeply disappointing that the Sunset Motel on the Bay had no vacancies, so we found a room at The Superior Motel & Suites, where we got a cute little room, very clean, with a wolf theme! Too cool.

Since it was our last night in town and on the road, we went to a favorite spot, Sand Point. My boyfriend had his coffee break while I munched on some snack or another as we watched the waves and clouds rolling in with the disappearing sun beyond. Visible in the distance was Grand Island, and the ever charismatic little old East Channel Lighthouse, with a splendid backdrop of the peaking colors on the hills of Grand Island. 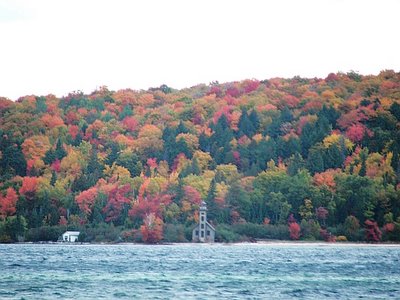 Sitting at Sand Point Beach gave us a great view of some really strange clouds that rolled in. I've never seen clouds like this before. 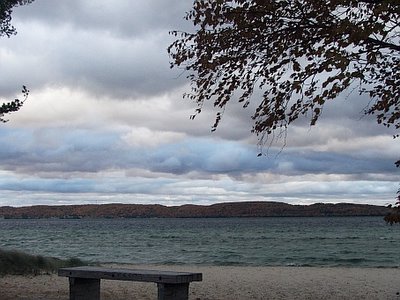 No rain or snow, just strange and colorful clouds. Thought maybe a tornado was heading our way. It was eerie. And it lasted quite a while. 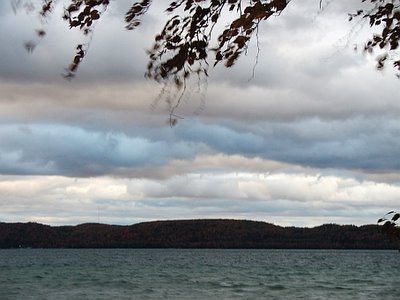 When it got dark, we had dinner at the most scenic restaurant in town, The Navigator. The meal was okay, but we got our favorite table that overlooks the marina, the bay and Grand Island in the distance. It was a spectacular view and a great way to spend our last night in town.

Sleep came fast and hard in our warm wolf room. The morning came all too quickly too.
Posted by Doggie Extraordinaire's Mom at 2:17 AM