With the promise of another overcast day, we awoke again to find it sunny and warm. What in the world happened to the weather in Munising? Every other trip I've made up there was mostly overcast, rainy, foggy or cold. This trip was nothing but sun and warmth. And I was angry!

Horeshoe Falls is a delightful area, privately owned, with a waterfall, garden and pond full of large rainbow trout. The proprietor, Terri, is a great lady who we always end up chatting with for quite some time before viewing the waterfall. She informed us that the ducks who inhabit the pond had babies and today was their debut on the water. All seven were cautiously swimming about, careful to avoid the leaping trout, and we couldn't wait to see them.

With the sun shining so patchy through the canopy of trees, taking pictures proved to be a challenge. 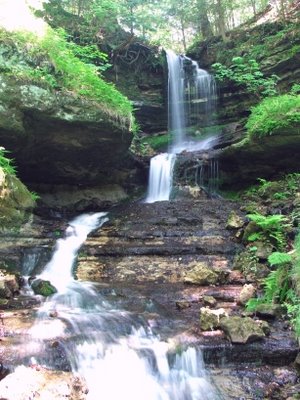 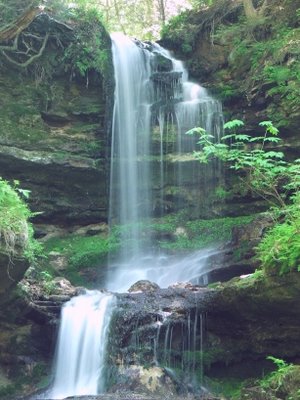 Water and rocks near the base of the waterfall 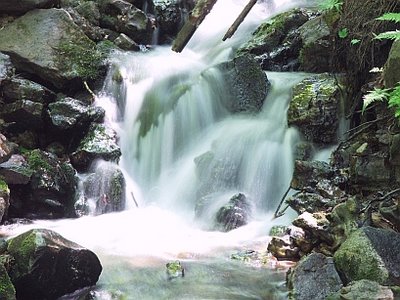 Segment of the waterfall 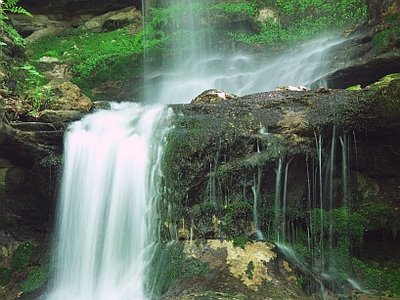 Despite the painfully loud lawn mowing being done by the groundsman, we found the momma duck and her seven ducklings at the pond.

Seven ducklings and Mom in the pond 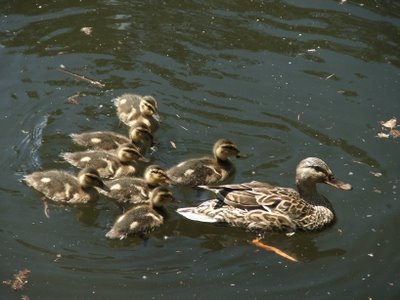 Water beading on the duckling's back 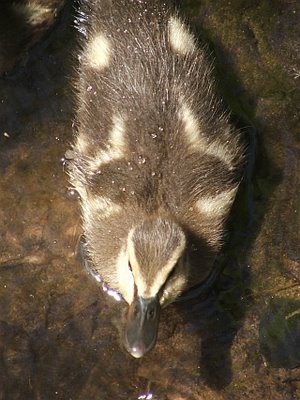 100 photos of ducklings later, we left Horseshoe Falls, made a quick trip back to the house for a potty break, and then on to Miners Falls.

Now, it's been years since I visited Miners Falls because the walk is long and it's WAY HIGH up! It scares the living daylights out of me. However, I decided to fight the fear of heights and go anyway. B.E. was impressed with the falls, being a first-time visitor. I was impressed with my ability to stand on the platform without having an anxiety attack. It was pretty. 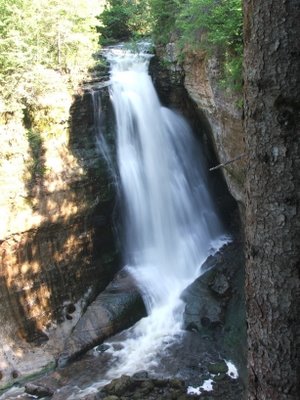 The base is always what gets me. The rocks at the bottom are intriguing, with two large boulders resembling feet (making the falls look a bit Sphinx-like to me) and smaller rocks breaking up the falls and shaping the flow of the water. 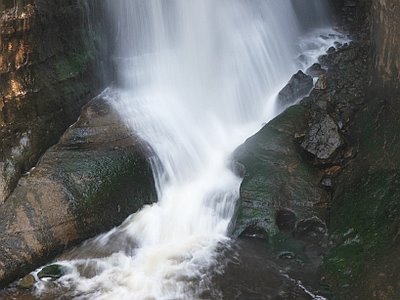 What made this so much easier to do, for me, was seeing two teenage boys had climbed off the platform, descended the steep cliff, and were wandering around at the bottom. Seeing them down there made me less frightened, somehow. So, thanks to the stupid teenagers who risked their lives, I actually enjoyed the viewing. 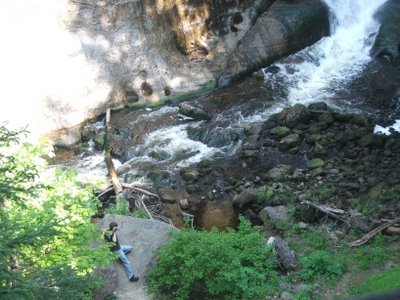 The long walk back to the car was hot and I was being attacked by flies and mosquitos, so I was a bit miserable. I could not dawdle like B.E. and check out all the pretty little wildflowers, like one of his favorites, jack-in-the-pulpit. I was losing blood and itching like crazy, constantly 50 yards ahead of B.E., and listening to him yell at me to slow down and wait for him. In the end, he beat me to the car due to my exhaustion and misery. The itching! Oh, the itching!

From there we went somewhere I hoped would be cooler and with less bugs. Miners Castle.

In April, there was a dramatic event at Miners Castle, when one of the two prongs at the top of the formation collapsed and fell to the water below. It happened a month after my last visit to Munising and two months before this trip, so I was excited about seeing the new shape in person. Despite the missing part, it's still quite a sight and the green water in the bay is always such a pretty contrast to the limestone and sandstone rock. B.E. calls this Pork Chop Rock because of the shape in the bay.

Miners Castle and the bay 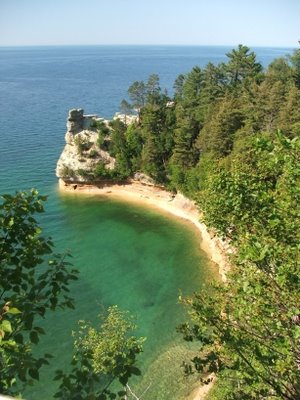 The lone merlon atop Miners Castle 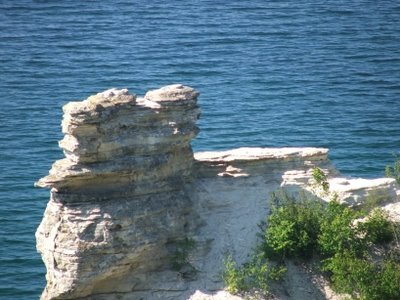 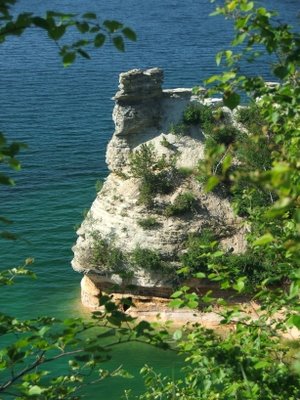 On the long walk down to the brink of Miners Castle, there is a point when it's possible to view the other Pictured Rocks through the trees, and Bridalveil Falls (which falls down the high cliff into Lake Superior) is visible when there is water flowing.

Bridalveil Falls through the trees 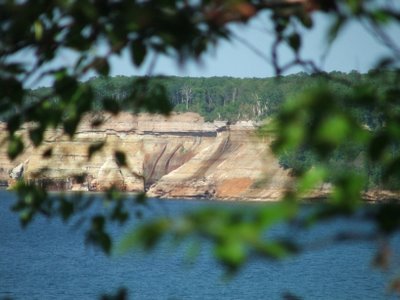 A view of the Pictured Rocks south-west of Miners Castle 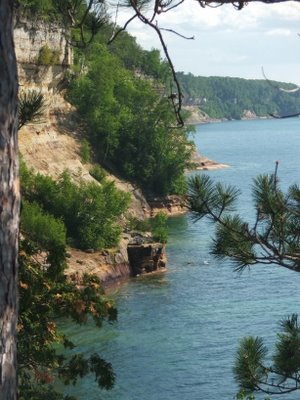 A close-up silhouette of the lone merlon 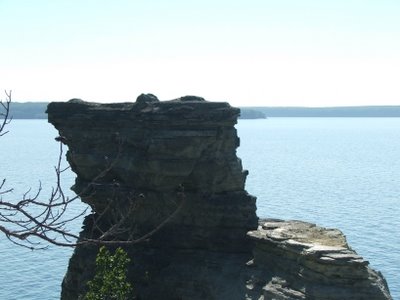 A furry caterpillar near Miners Castle 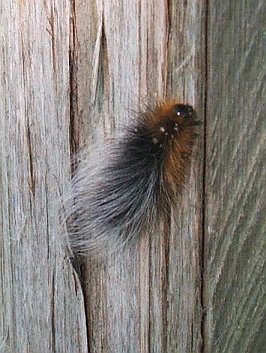 After chatting at the precipice of Miners Castle with other tourists, we headed back to town. It was so warm that we decided to pack some goodies and have a late Coffee Break (Coffee-less Break for me, with hot chocolate) at Sand Point Beach.

The temperature was is in the mid 70s and the blaring sun had been giving me headaches for days, so I put on my dorky Dollar-Store sunhat, grabbed the crossword puzzle book and blanket, and we parked ourselves on the beach. It was great. 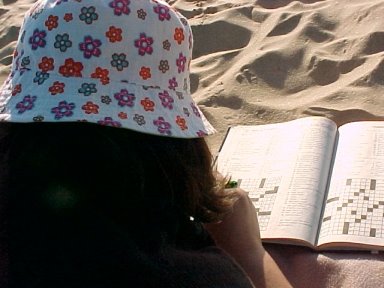 Photo taken by Boyfriend Extraordinaire
B.E. strolled over to the water to gaze at the lapping waves. He would not tip a toe in and was decked out in jeans, a T-shirt and a sweatshirt.

B.E. tempted but not touching the water 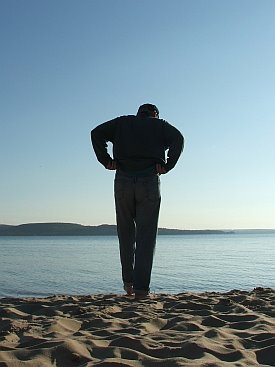 I had so many fly bites up and down my legs and arms that my entire leg and foot started swelling up below my knee. Grotesquely! My calves were tight and I could hardly bend my feet for most of the trip and in the days following. B.E. might have been a sissy about the water, but I walked, with my swollen feet and legs, into the water up to my calves. I screamed and ran out, but at least I tried!

My foot in Lake Superior 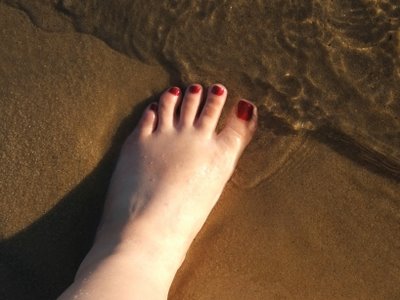 When we left the beach much later, with little remaining space on my legs and arms that had no bites on them, we headed home.

For a few years, there has been a beautiful brick home on east side of the bay, near the corner of H-58 and Washington, which has been for sale. I don't know how much the owners are asking for it, but I love that house and wish it was mine. B.E. took a picture of it for me. Isn't it puuuuuurty!?

I love this house 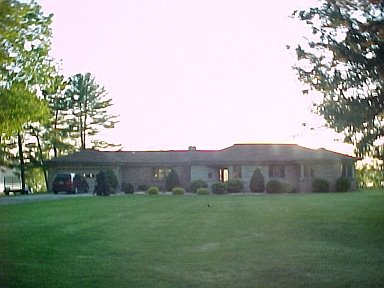 One day....
Posted by Doggie Extraordinaire's Mom at 2:54 PM