Sticking with the plan to go to Marquette on Tuesday, I was enormously disappointed that it turned into a cloudy day. Those clouds were supposed to be there for my waterfall shots!

Anyway, it looked like we were going to be rained on and we wore our warmer clothes just in case. B.E. had his down coat, to be on the safe side again. How anyone can wear a down coat in June, when the temperature is in the 50s and 60s is beyond me. He admits he has lizard blood. I'm starting to think it's true.

On our way to Presque Isle Park, we stopped at a parking lot near the lighthouse to enjoy the hazy view. 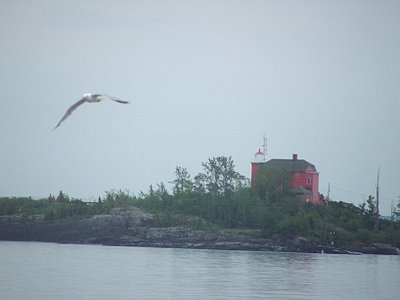 There happened to be some teenagers in the water playing a game with a tennis ball, trying to catch it while submerged. Kids are made of a material much tougher than adults. These teens were in the water up to their waist wearing only shorts and T-shirts. The temperature outside was in the upper 50s and the lake water couldn't have been more than about 40º.

The gulls and the hazy fog made it even more moody to watch.

B.E. captured the gulls overhead as the
teenagers played in the cold Marquette water 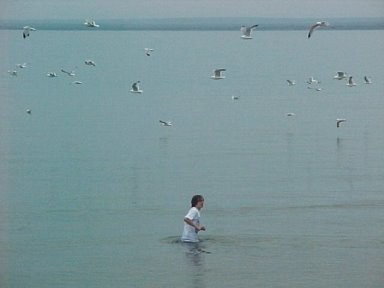 Photo taken by Boyfriend Extraordinaire
I snapped this shot of the same kid skipping rocks on the water. 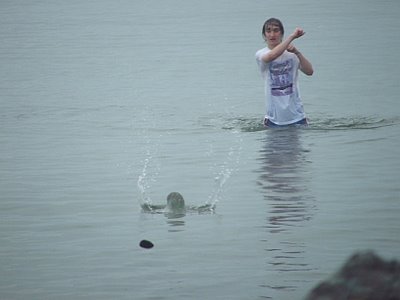 From this location, I could see a huge ship approaching the ore dock. Again, our luck was good as we were then able to watch it load up. 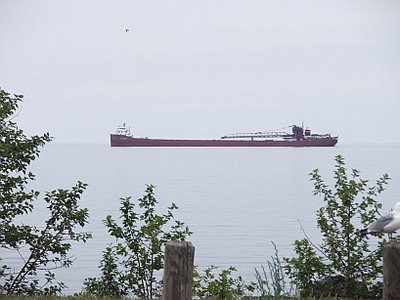 The Kaye E. Barker, loading up
at the Marquette ore dock 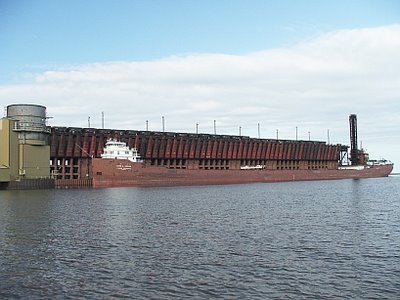 From there we drove to Presque Isle Park, which is probably the single more gorgeous park I've ever been to. 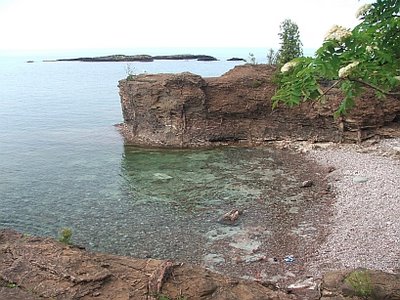 Is this some kind of surfboard? I don't think I've ever seen this before. It was like a combination of a surfboard and a gondola. How is this fun? 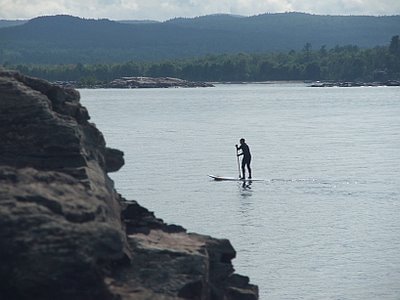 While we were climbing and sitting on the rocks, a family was nearby grilling and having a family day. The two young boys appeared very comical to B.E. and me, with their shaggy, feathered, blonde hair. He said they appeared to be wearing wigs and they were henceforth referred to as the Wiglettes.

Here is the younger Wiglette tossing rocks into the water from a small craig. 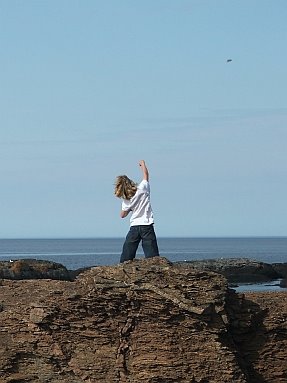 From there we returned to the beach area adjacent to the loading ship at the ore dock, and we wandered up and down the sand for a while, waiting for the ship to leave. It was there for hours and we got impatient. We never did see it leave. It could still be there now.

What we did find were hundreds of little yellow clam shells, ringed and textured like none we'd ever seen. They were really cute, so B.E. created a monolith in their honor and I "sang" the theme to 2001: A Space Odyssey. 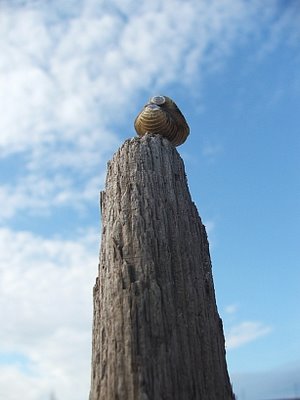 The visit through downtown Marquette was fun. We met many characters who own stores and chatted the afternoon away. One of the things I love most about Marquette is the casual urban atmosphere of it. Many of the downtown stores have one employee working in them, and that employee's dog. I met a gorgeous golden retriever named Leica in the store Superior View (which is a favorite store to visit, with their gigantic collection of old photographs of the area), and she was more than accommodating when I wanted to pet her and rub her belly. The presence of dogs in the shops of Marquette makes the area all more endearing to me. Why did I not take a picture of that sweet dog? I'm still trying to answer that.

The owner of Leica recommended stopping at the Brownstone Inn in Au Train for a meal, which I'd been curious about for a few years, but never stopped in. This time I took his recommendation and we had dinner there on the way back from Marquette. OHMYGOD, the food was excellent! It may very well be my favorite restaurant in the area now. Inside the Brownstone Inn, the decor is as charming as the view. We loved this place so much that we returned for our last meal again on the night before we left.

On the way back to Munising from Au Train, we stopped at a few of the scenic waysides to watch the sunset. And what a beautiful sunset it was! 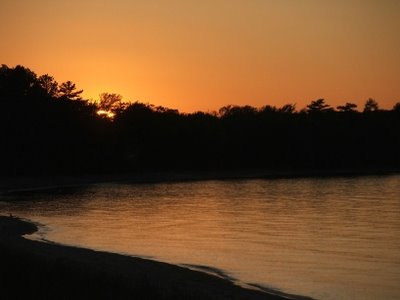 While we were wandering the beach, there appeared a giant bare, human footprint, which I took a photo of. B.E. was talking about it being a sign of Bigfoot and I said, "That's scary," thinking of a yeti being somewhere in my favorite region. B.E. misunderstood me and thought I said, "That's Gary." So, now Bigfoot has a more personable name: Gary. Earlier in the trip, I had also accidentally said "foottrack" instead of "footprint", so whenever we came across a track or footprint, B.E. made fun of me and called it a "foottrack." Thus, the discovery of the large foot imprint in the sand became "Gary's foottrack." 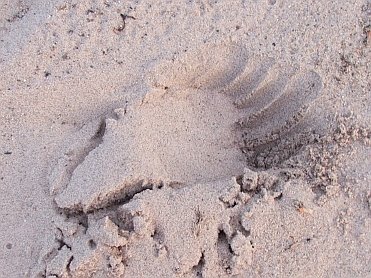 At the next scenic wayside, a little farther down the beach, the sun was almost gone and the scene was just as pretty.
More sunset 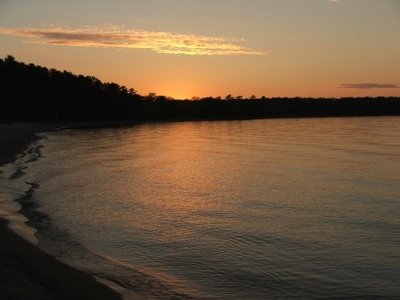 And at last, I gave up and took one final sunset shot through the trees. 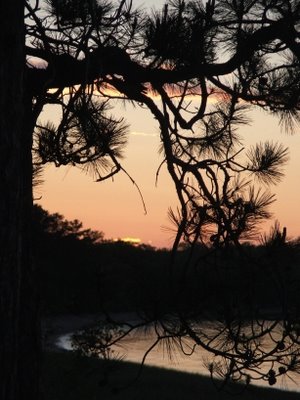 When we got back to our house, we were stuffed, we were exhausted, and we were ready for some more "X-Files" before turning in for the night.
Posted by Doggie Extraordinaire's Mom at 2:55 PM