It was our last full day and night in Munising and we were determined to spend it leisurely.

With the temperature at 86º on Saturday, and being worn out from the previous day's activities, we decided to spend a day lounging at Miners Beach, the best beach around.

You'd think that in the middle of June on a Saturday afternoon, there would be more people at the beach than this. Weird. 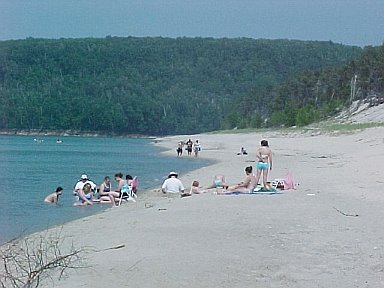 To the left is the back of Miners Castle and the cool area where Miners River empties into Lake Superior. To the right are the Pictured Rocks. You just can't beat the view!

The back of Miners Castle 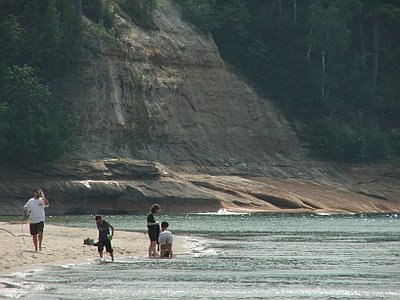 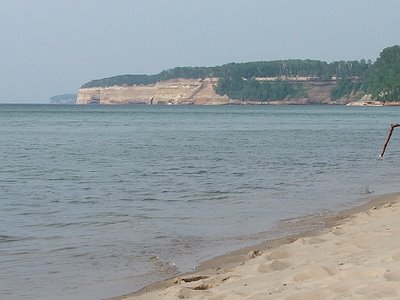 When the flies got to be too much, both B.E. and I decided it was time for a swim. I didn't believe he'd actually go in the water, so I took his picture as he got his feet wet. What we discovered later was that there is an image of an old woman's face on his knee. What the...? He says his knee is haunted. It could be. But we have proof of him being in Lake Superior, and that's what's important.

B.E. in Lake Superior with a haunted knee 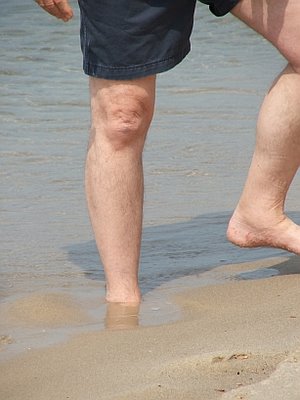 We eventually made it in up to our chests, but it took a long time getting used to the temperature. For some reason, the extremely cold water made us hyperventilate and speak in a very high-pitched voice. Grasping for air and stuttering in our falsetto voices, we together managed to submerge in the icy water. B.E. actually swam, which blew my mind. When I was finally getting used to the water, he decided to get out. I stayed in. Once I was numb, I didn't want to get out. I was actually on a beach and wasn't being eaten alive by the flies -- I couldn't get out if I wanted to!

B.E. took this picture of his feet all warm on the beach and my tiny head visible in the distance as I continued playing in the water.

B.E. and me at the beach 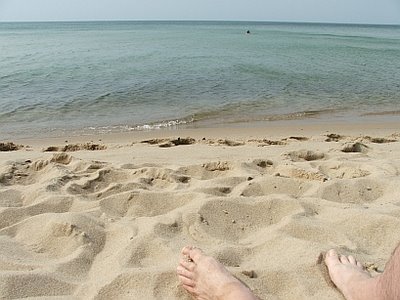 Photo taken by Boyfriend Extraordinaire
After my lengthy dip, I emerged from the lake and collapsed on the blanket to do some crosswords. B.E. decided to wander down the beach, where he met up with a family who had buried the father in the sand. What is it with people burying their family members in sand around here?

A dad buried in the sand at Miners Beach 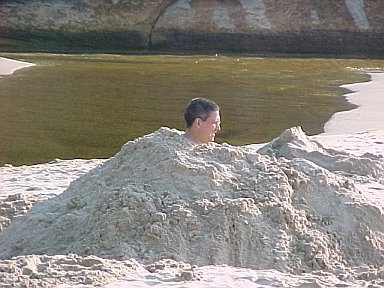 It was our last full day in Michigan and we decided to spend the night quietly, having a delicious meal at the Brownstone Inn and turning in early so we could make check out. What a vacation!
Posted by Doggie Extraordinaire's Mom at 2:51 PM