It was hot on Thursday. I was not happy. And it was sunny again. Some people like this on vacation.

I AM NOT SOME PEOPLE!

There is a very scenic route to Grand Marais along H-58, but it is a rough drive in any vehicle. More than half of it is unpaved, unimproved dirt and gravel road, with potholes that make the ones in IL seem puny. We didn't drive to Grand Marais partially because a portion of the end of 58 was closed due to them paving it, which they are planning on doing to the entire length, but I'm guessing it will take many, many years. However, we did drive to Twelve Mile Beach to rock hunt.

It was a terrible ride. It took well over an hour to get there, 30 minutes alone to drive the last 6 miles, and we were practically sick by the time we arrived. We parked in the first available place and headed for the beach.

I bought these retarded shoes at Wal-mart (yeah, I shopped there; I'm ashamed; I'm sorry) to try out on the beach, thinking they'd suck. But they were awesome!

My awesomely retarded Wal-mart shoes in the water 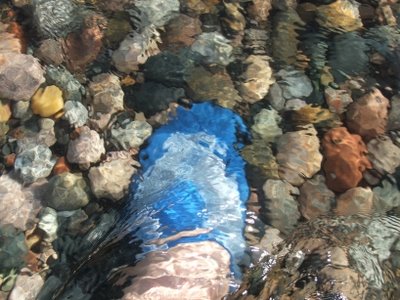 These shoes made walking on the rocks, in the hot sand and in the water possible. They're too cool! I walked all over the beach on the rocks looking for agate. I found almost nothing agate, but lots of other pretty rocks were in abundance. 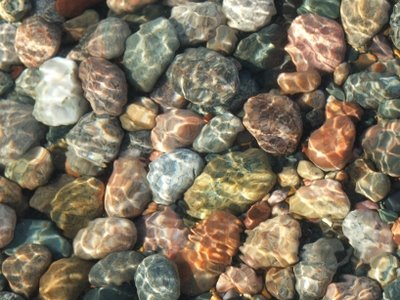 More pretty rocks in the water 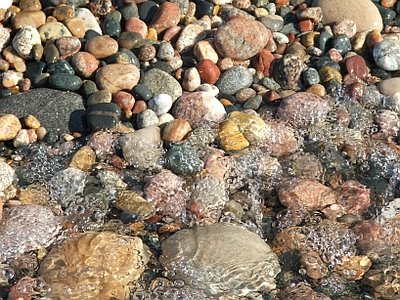 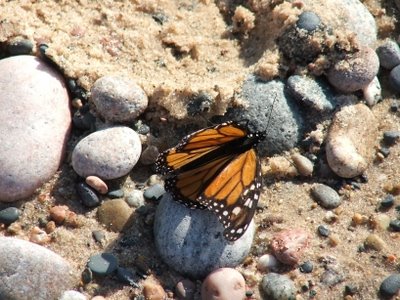 B.E. took this picture of me combing the beach for agate, with my camera bag and camera in tow, plus my pockets loaded with pretty rocks. NO! No rocks. I kid. It's a crime to take rocks from a National Park. I wouldn't do that. Those were BATTERIES in my pockets. I was merely taking pictures of the rocks I liked. I swear. 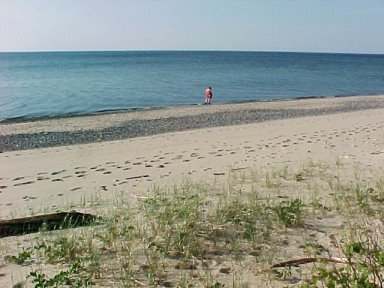 Photo by Boyfriend Extraordinaire
So, I took this picture of B.E. looking for agate too. Just to look. Not to keep. 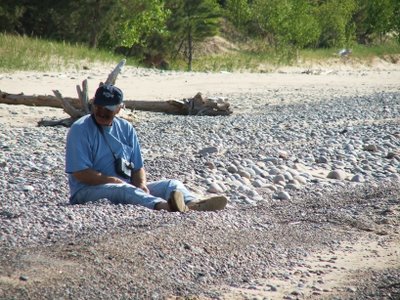 The flies were killer. The only place they didn't bother me was in the water, when I was walking and splashing in it. Evidently, the flies like to live near the water, but they don't like to get wet. So I knocked them into the water at every opportunity. It wasn't often enough. They ate my legs and arms up. I decided we had to leave when I reached down to swat the searing pain in my left leg, and I scared off about 8 flies, leaving behind 8 drops of blood, which I smeared down my own leg when I swatted them away. A bloody leg was too much. I had to leave.

The ride home was just as treacherous. We drove even slower and it took so long, B.E. started falling asleep.

One thing that kept us awake was the search for wildlife. Lo and behold, we saw a red fox! No pictures to prove it because we were so shocked we just sat in the car staring, but it was definitely a fox. SO COOL! It was fuzzier than I thought it would be, with a big, poofy tail. Just gorgeous.

We played around with the map and took some alternate roads to unknown areas, looking for an escape from the terrible time of driving on 58. We made our way to Ross Lake, which was just gorgeous. As I pulled the car up to the boat launch to see the water, I noticed a painted turtle standing half-way down the cement ramp. I threw the car into park and jumped out of the car to grab it. I only had about 15 feet to run, but by the time I reached him, he'd scurried into the water.

B.E. likes to tease me that I was outrun by a turtle.

We stayed a bit and waited for the turtle to return, but he did not. B.E. admitted it never crossed his mind to pick up a turtle, but he was thrilled that I'd thought of it.

I asked, "Well, what's the difference between a turtle and a frog? You see a frog and you pick it up, right?" This was true. He had no answer. I suppose it's irresponsible to bother the wildlife, even if the animals are harmless to us and we have no intention of harming them. Still, when I see a turtle, I want to hold it. They're just cute that way.

We drove back to town after driving all around many lakes in the area, and it was high time for a shower and some dinner.

Let me tell you, B.E. is worth his weight in gold because he made it his job, his duty, to scratch all my bug bites for me, whenever I needed it. That's extraordinary. He earned his title.
Posted by Doggie Extraordinaire's Mom at 2:53 PM