Since almost everything is closed in the Upper Peninsula on Sundays, it was the perfect day to see and do things completely unrelated to commerce.

First we went to a scenic beach in Au Train.

Given that the temperature was still in the 50s and 60s, B.E. was bundled up like it was the middle of winter. He stood out a little bit on our expeditions in his down coat over multiple layers of clothing. Note the blaring sunlight in the photo below. It wasn't that cold, folks.

B.E. about to leap over Scott Creek
where it empties into Lake Superior 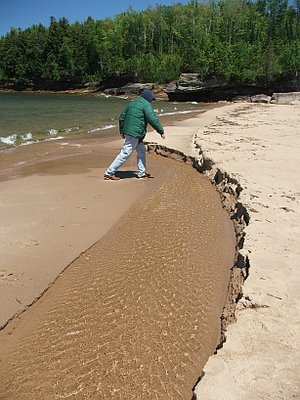 It was becoming a tradition to meet up with a dragonfly who wanted to befriend us. They are strange insects. 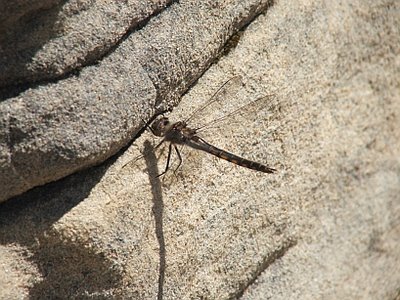 I just thought the texture that the sand and water made in Scott Creek was fascinating.

Worms? Or just an illusion? 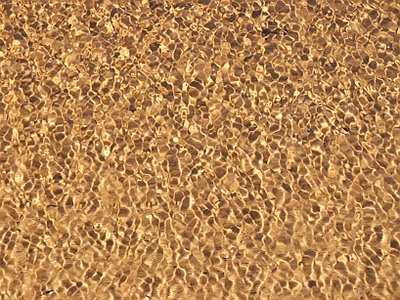 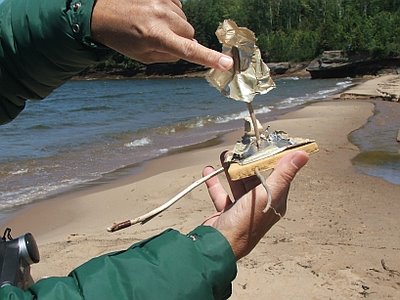 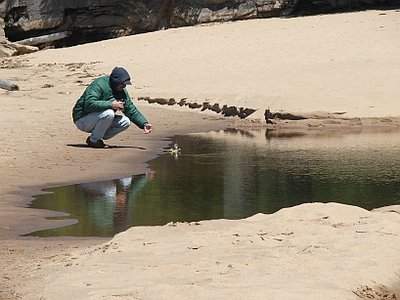 He made at least three debris sailboats, and all but one made it across the vast expanse (haha) of Scott Creek.

The view down the beach, beyond the sand, was quite picturesque. 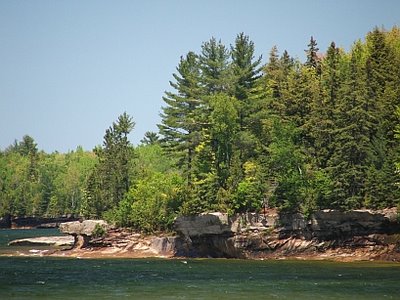 From the beach we crossed the street to visit Scott Falls, which is a small but interesting waterfall because you can walk all around it. 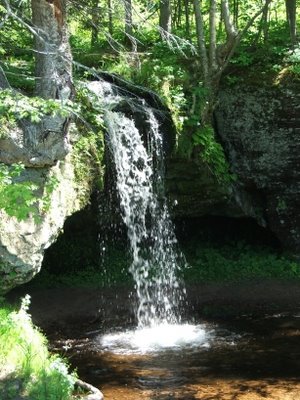 Once you descend the semi-muddy embankment and cross the creek using the well-placed rocks for steps within the creek, you can actually walk around behind the falls, into a mossy cavern and see the waterfall from behind.

B.E. ducking into the cavern behind Scott Falls 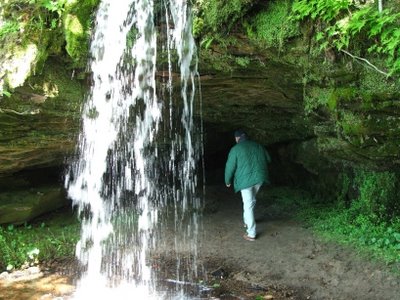 These photos are out of order a bit because as soon as I got to the embankment, I scurried across it and ran around the back of the waterfall, before B.E. even approached it. There's something so cool about being able to go behind one that I am unable to slow down enough to enjoy the front view before I'm bounding around for a rear view. (Jokes can be kept to yourselves here.)

Scott Falls, seen from behind 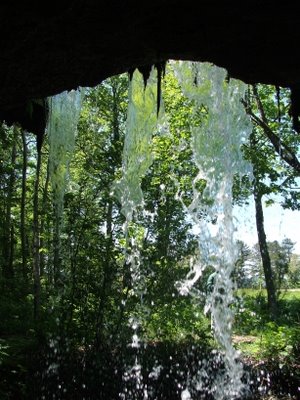 The next stop was the Bay Furnace in Christmas. 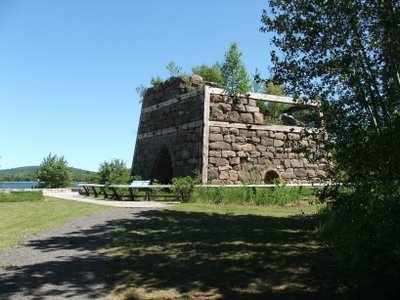 This historic site contains a dilapidated remnant of a bygone era. The bay furnace was erected in 1867 to smelt iron ore and turn it into "pig iron". What's left of the burned-down operation is a curious kiln of sorts, and all around the area you can still find the byproducts in the form of slag, from the smelting process that took place here. The slag is quite beautiful to me. You can find it in small pieces or large chunks, varying from green to purple in color, shining like glass in the sun. Below you can see the crystal-like shapes of the slag protruding from the sand along with other, more natural beach presences.

Slag among the rocks 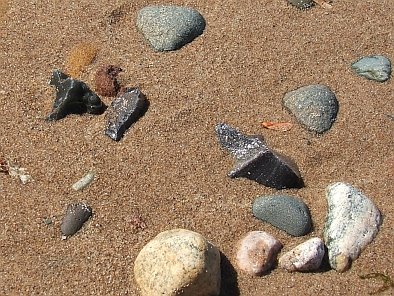 Of course, where the water splashes on the rocks, I find beauty. 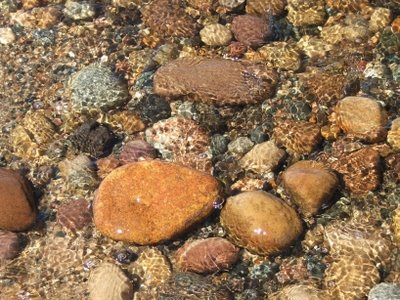 On the beach by the Bay Furnace, a father and his two children were playing in the sand. Much to my approval, the father attempted to bury his children alive. True to most their age, the children would not be silenced or their spirits slowed despite being covered in earth. Can you see the daughter in the photo below? All that was visible was her left arm, and yet she continued talking nonstop beneath her protective hood (covering her face) and pounds of sand.

Children buried in the sand 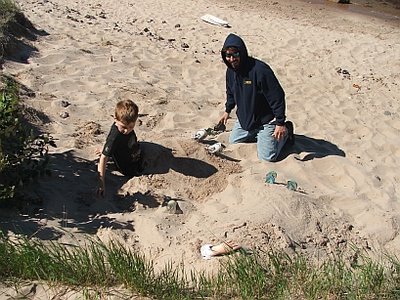 After our Christmas adventures, we returned to Sand Point for a more in-depth exploration down the beach, which we like to call the Tree Graveyard. 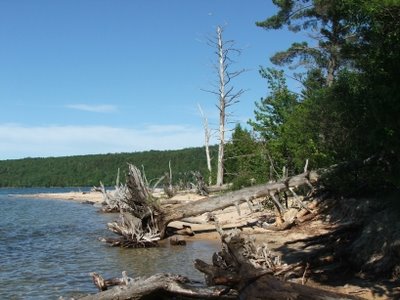 At the Tree Graveyard is my favorite piece of driftwood. Seriously. I have a favorite piece of driftwood. I'd take it home if it wasn't so gigantic and buried in the beach. It is the shapely, upturned, water-stripped and bleached roots of a tree, half-embedded in the sand. There's something about the shape of this natural sculpture that makes my heart sing. I just love it. I wish I knew if it was a fallen tree that washed ashore here or if it lived on this beach and fell as the lake took it's life.

My favorite piece of driftwood 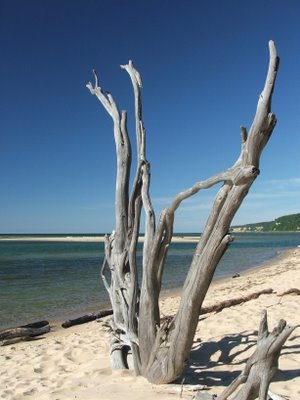 We wandered down the beach at Sand Point, climbing over fallen tree carcasses and losing sight of all the familiar landmarks like Grand Island and the Pictured Rocks. We were so deep down the shore that we ran out of beach, climbed onto land, and wandered down a forest trail for so long that I feared we were well off the beaten path, and into a seldom used area of the wilderness. The trees were strikingly tall, red pines and hemlocks, older than the two of us put together. I do so love red pines! There was little growing on the forest floor here due to the sunlight being completely blocked out by the canopy of towering conifers. When sunlight penetrated, it was really something.

Lost in a conifer forest near Sand Point 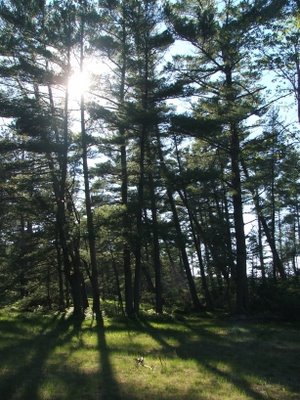 As is typically the case when on an adventure with me, I had to pee. I think that we are forced to leave each and every place we go because I must find a bathroom with running water and toilet paper. The woods will not suffice. I am spoiled and vain that way. We found our way back to the car and hurried home (to the cottage) so I could go to the bathroom, and that was the end of our day after a quick shower and a nice dinner out.