Our first full day in Munising was very leisurely. We slept late, got moving late, and it was afternoon before we even saw the first sight.

First up is almost always Sand Point. Sand Point Beach is fantastic, and behind that is the Sand Point Marsh Trail, which B.E. and I refer to as the Bog Walk. The trail is about a half-mile of boardwalk through the marsh and forest, where educational signs abound to instruct visitors that there are countless species dwelling within the area. Never before have we even seen anything other than some common birds and plantlife, but the walk is really beautiful. On this trip around the marsh we were accompanied by a dragonfly who seemed to truly enjoy our company. 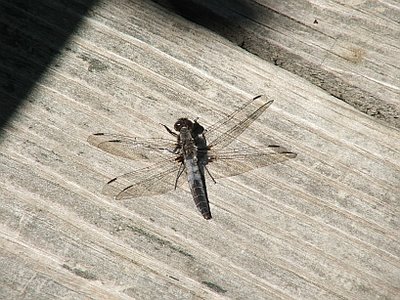 Or perhaps he was aware that the biting insects lust after my blood and he was waiting for an easy meal or more.

The reflections of the plants in the water, with the glistening sunlight always captivates me. 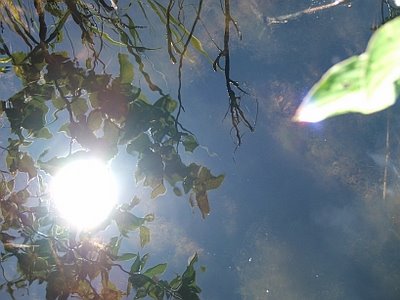 The water lillies in the wetlands and ponds where I live are all circular, with a slit as a radius, making them resemble Pac Man. They also bloom with white flowers. The water lillies in Munising on the Bog Walk were heart-shaped, with yellow blooms. However, not a frog atop a single one of them was evident. 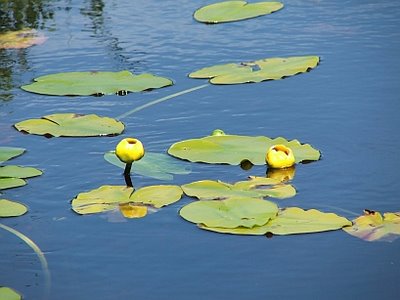 As we continued along the boardwalk, we heard a bird squawking loudly, in alarm and looked up to see a bird which resembled and sounded like a crow, cawing and flapping frantically, trying to chase off an offending visitor. The visitor flew effortlessly through the air, as if making an attempt to appear unmoved by the crow's shenannigans. It soared overhead for quite some time before finally leaving the crow to return to her nest and regain her composure. Thanks to the invasion, I was able to capture my first photo of one of my favorite creatures in the world. 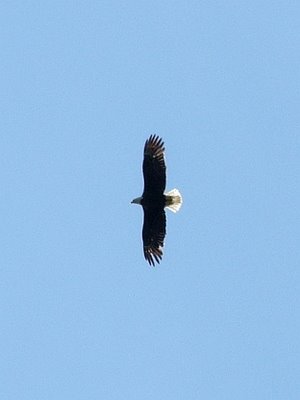 We were a bit disappointed that we were unable to see any other wildlife in the Bog Walk area, so we headed to Sand Point.

The view is always breathtaking.

Looking west into the bay with Grand Island in the distance 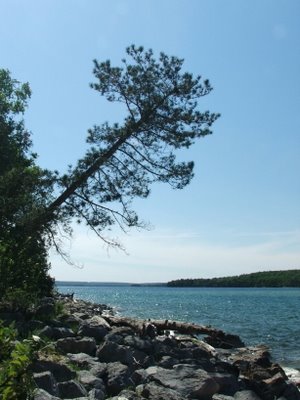 Looking east at the Pictured Rocks:
a sandbar in the foreground,
Miners Castle in the far left corner 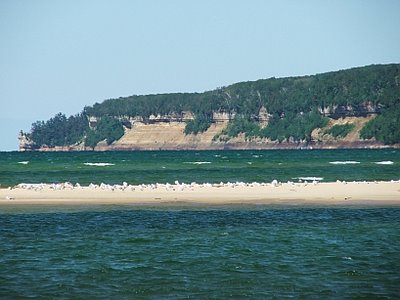 From Sand Point I took B.E. to the Grand Island Scenic Outlook, which is high atop one of the hills that hugs the town of Munising to the lake. My fear of heights did not stop me and I walked all the way to the edge of the platform to take pictures of the view. 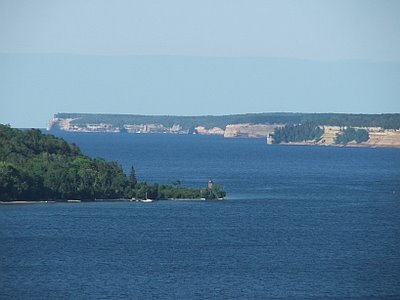 At that point we reached a time that B.E. likes to call Coffee Break. For Coffee Break, he requires coffee and something sweet to be consumed at a scenic locale, with water present. At home we search for a lake or river to gaze at during Coffee Break, but in Munising, just about everywhere will suffice. On this day, we chose the city fishing pier, where we were alone, watching the fish leap out of the water, the ducks swim at the shore, and the gulls diving and soaring overhead as they looked for small fish for their own meals. It was a peaceful and beautiful Coffee Break. We walked out onto the pier to stare into the water looking to identify some fish, but none were showing themselves. As we left, a man and his daughter came to fish off the pier and the scene was really cool with the gulls flying over his head.

Fishing at the city pier 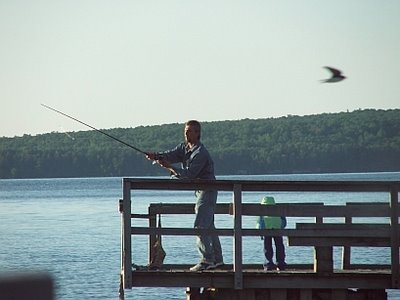 It was a perfect day.
Posted by Doggie Extraordinaire's Mom at 2:58 PM