We had big plans for Tuesday: get up early, drive to Grand Marais for breakfast (FRENCH TOAST!) at our favorite breakfast spot, the East Bay Diner, a visit to the Grand Marais sights, and a trip to the Seney National Wildlife Refuge. The problem was getting Boyfriend Extraordinaire up early. When the alarm went off, I had this mental image of wrestling and arguing with him for an hour, trying in vain to get him up, until we were leaving too late to get breakfast and I'd be in a bitter and rotten mood for the rest of the day. So I looked at the clock, decided that I didn't want to struggle on this trip, and turned the alarm off, rolling over and sleeping in with him. When we finally got up two hours later, B.E. was sad but grateful that we slept in, and instead of going to Grand Marais, we had breakfast in the room and just went to Seney.

Seney Wildlife Refuge is a gigantic area of preserved land, and a sanctuary to all native wildlife. In addition to a number of hiking paths, there is a road that winds through a section of the refuge that is about 7 miles long, but we have never made this loop in less than two hours. We cannot drive more than 10 miles an hour because there is so much to see, and we're constantly pulling over to investigate things more closely, so I knew that skipping Grand Marais would actually give us more time to explore Seney, and it really wasn't much of a loss.

The first thing we noticed was that the dragonflies were practically in plague numbers. I invented a slogan for Seney, which they're welcome to steal if they like it.

"You know you're driving through the Seney Wildlife Refuge when there are hundreds of dragonflies flying next to your car, and they're going faster than you are."

We got out of our car to check out a pond with swans, and the dragonflies seemed to think this was an invitation to hang out with us. 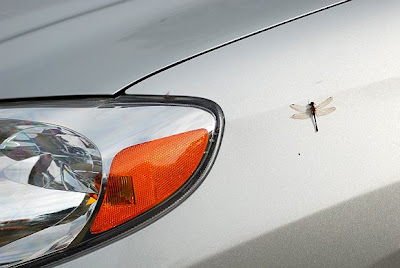 Although it wasn't peak color, there were definitely some signs that it was soon to occur. 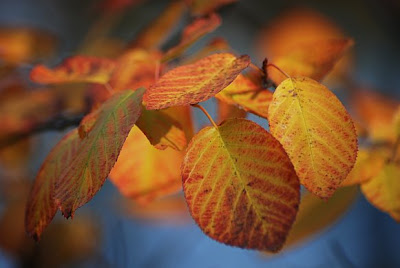 The most abundant creature you see in Seney aside from the Canada geese are the swans. They are everywhere. And they clearly are in charge. I watched this pair of swans swim seemingly peacefully with the geese until one decided to chase off the geese, and the partner joined in. They started honking and went after the geese. 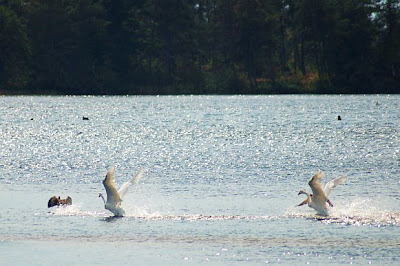 When the geese flew off, the swans settled down and owned the pond again. 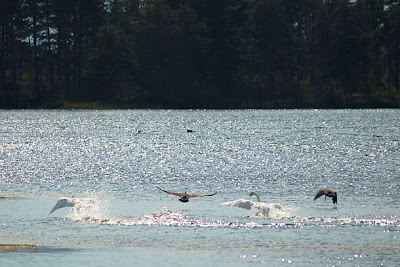 Mostly, what we saw were swan butts. Hungry critters, they are. Always digging for food. 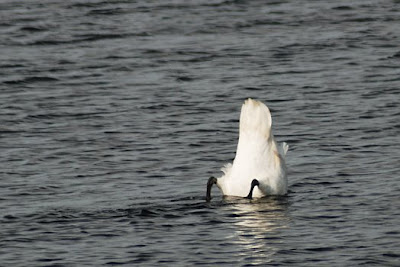 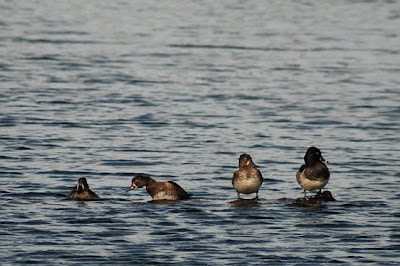 This squirrel sat very near us munching on a pine cone like it was an ear of corn. It doesn't get much cuter. If you're not in love with the fluffy tail, the big, beady eyes or the adorable little ears, you have to love those awesome fingers! 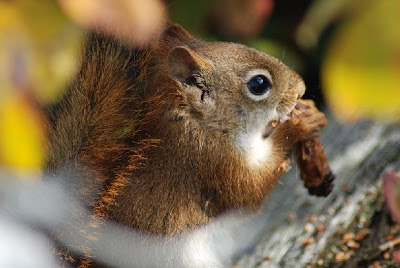 Isn't it late in the year for caterpillars? This is a woolly bear caterpillar, which turns into an Isabella tiger moth. 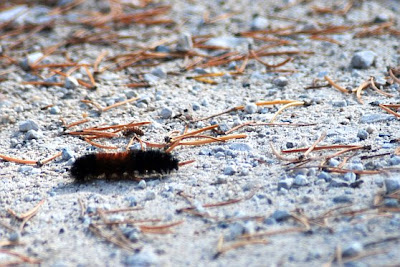 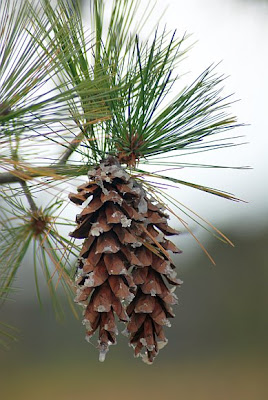 One of my FAVORITE creatures in the world! The stunning! The beautiful! The WOOD DUCK! Woohoo! *applause* 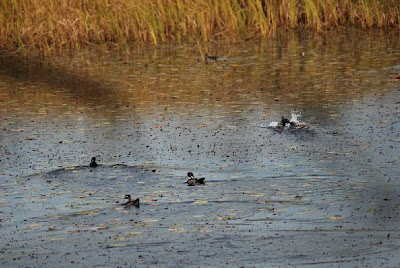 Awwwwww, a baby pied-billed grebe! This one routinely dove down below the surface and swam underwater like a little speed demon, probably looking for food, or just playing with us. I couldn't tell. 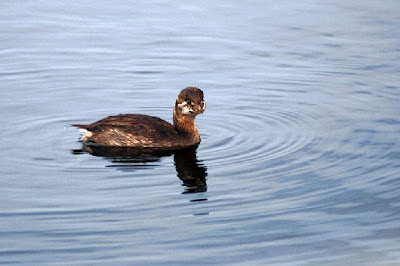 Despite the fact that Seney is a wildlife refuge, there is no guarantee you're going to see anything at all, thought it is the perfect setting. We were a bit disappointed that we didn't get to see any larger animals, and only one mammal -- a squirrel. So, we decided to take a second trip through the park. The second time around, we met up with more birds, like blue jays, a kingfisher, and we were yelled at by a number of squirrels and chipmunks.

Two trips through took us over 5 hours. That's 14 miles in 5 hours. It was like being home and driving in rush hour traffic, only no other cars slowed us down.

On the way back to Munising, I went looking for a restaurant that was recommended to me a couple years ago by a young woman who lives near Munising. Randi found my blog one day and sent me an email, telling me to stop off at her sister's restaurant called the Boot Lake Bar & Grill in Shingleton. I looked it up online earlier that day and thought I located it on the map, but when we drove up the road where it was supposed to be, it was nowhere to be found. I don't know if it closed or if I somehow missed it, but we weren't able to visit. So sad.

However, Shingleton was ablaze with color, highly visible even in the dim light of dusk. It was a great drive.

We might have missed out on the best French toast in the world at the East Bay diner in Grand Marais, and we also missed out on untold goodness at the Boot Lake Bar & Grill in Shingleton, but we had a great day. Truly. Seney is always worth it.
Posted by Doggie Extraordinaire's Mom at 6:55 PM