We woke up early in Munising with the plans to check out at the Sunset and go to the Dogpatch for breakfast. I'd been a frugal girl all week and wanted some biscuits and gravy, dammit! Well, that didn't exactly work out. We got out of the room later than we hoped because we had so much stuff to bring to the car, and when I turned in my key, I chatted with the Sunset's owner, Carmon, for a while. See, that's part of the draw of this area. It's not just that it's beautiful, and it's secluded, and there are tons of things to see and do. It's the incredible people who enhance the trip and make the area all the more special to me. I love Carmon and the Sunset Motel. It feels like we're staying with friends when I go up there.

Since we missed breakfast at the Dogpatch, we hit the Navigator instead. Breakfast was decent and I got my biscuits and gravy, so I was happy again.

Our room at the Superior Motel wasn't cleaned yet when we arrived, so we decided to hit some sights before settling in at our new room, and we were off to visit another friendly place we love.

Horseshoe Falls is on private property and is only open during the summer and fall. If you have the good fortune of visiting, you are greeted by a beautiful trail that runs up the creek that feeds Horseshoe Falls. Aside from the waterfall, there are picnic areas, and hidden among the trees are Laafs, if you can spy them. There's also a huge pond with rainbow trout that you can feed, and being the acrobatic fish that they are, they leap out of the water and you can see their pretty pink bellies. And if the natural stuff isn't enough of a draw, there is always Terry, the proprietor of Horseshoe Falls and its gift shop. We love Terry!

My favorite things about these waterfalls are mini falls you meet on the way to the main waterfall. 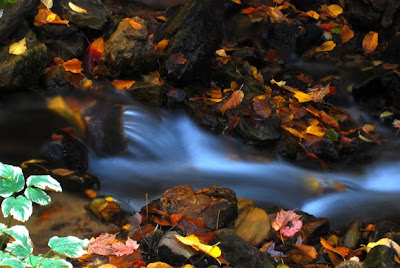 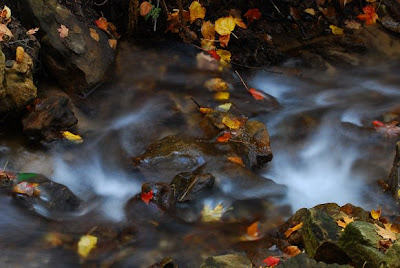 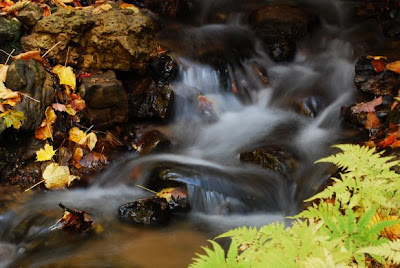 Of course, Horseshoe Falls is very pretty, but it's surrounded by so much prettiness too. 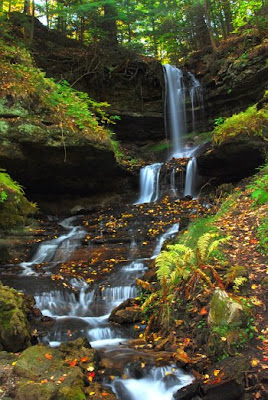 And during the fall, when the colorful leaves collect on the rocks, it's even prettier. 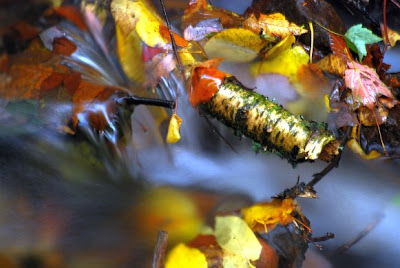 When you're done visiting the falls, the rainbow trout await. 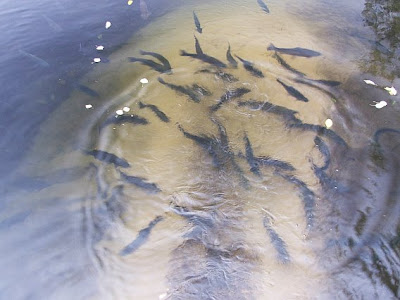 For more Horseshoe Falls photos, click the image below to go to my Tabblo page.

On our last afternoon in Munising, we chose to go to the Tree Graveyard again. It's such a fabulous location, and we really didn't have an opportunity to explore it much earlier in the week.

You can see why we call it the Tree Graveyard. 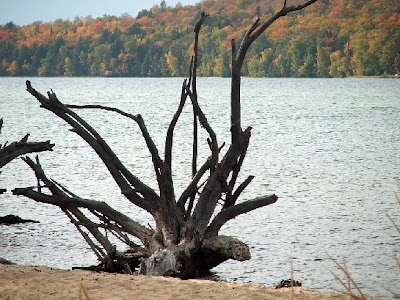 The East Channel Lighthouse sits on Grand Island, in the middle of Munising Bay, and it never looks quite as picturesque as it does in the fall, when surrounded by colorful trees. 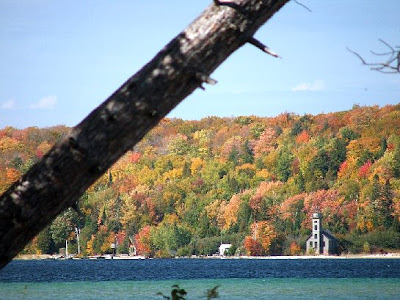 B.E. is a character, if you haven't figured that out yet. Walking along the sandy shoreline, he noticed that there was an awful lot of debris on the beach that would be perfect for constructing some of his debris boats. This was when we both realized he hadn't ever launched a debris boat in Munising, so clearly it was time to do so. He found his hull, sail and rudder and started carving away and putting it together. 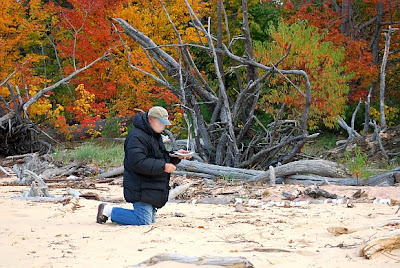 With a feather for a sail, a hunk of birch for a hull, and a flap of bark for a rudder, the debris boat was ready to be launched, and B.E. walked half-way down the newly created sandbar to launch is ship. 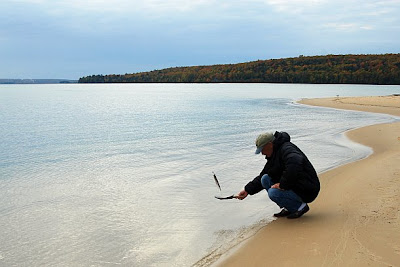 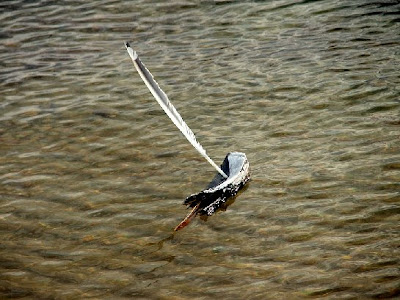 That little boat sailed all the way across the bay to the beginning of the Tree Graveyard. This is the distance she spanned, the sandbar in the background where she was launched and the big rock in the foreground where she eventually came ashore. 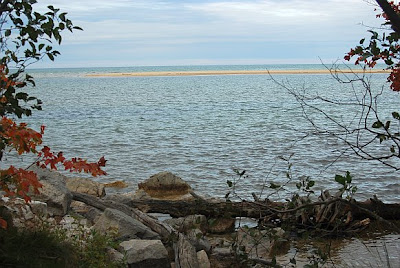 When she reached the shore, I thought this was a great thing. She'd made it across the bay and became gently moored on a rock, as if she steered herself ashore. B.E. was sad that she was done so soon and he climbed down the rocks to re-launch her. 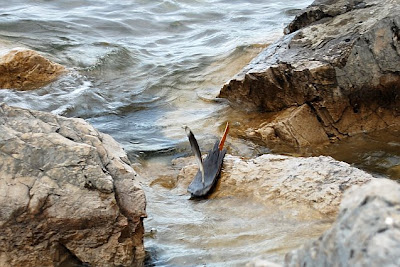 The re-launch didn't go so well. He pushed her back out to sea, but the waves kept pushing her back to the rocks. Eventually she fell apart and B.E. was even sadder. He should have let her stay where she landed. She might still be floating there now. 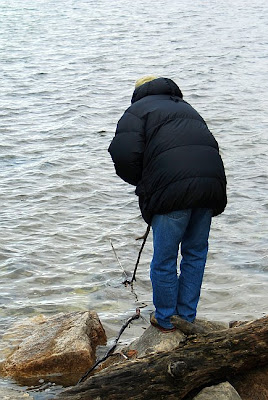 There is another thing about the Tree Graveyard that thrills us. There is an apple tree right near the parking area, and B.E. has long sworn that these are the best apples around. I had not tried one of them because his taste in apples is fairly bad, as he prefers the sour, green apples, but he has always insisted that the apples on this tree were blue ribbon quality. My devotion to Cortland apples is a bit of an obsession, in all reality. I just cannot bring myself to eat other apples because they pale in comparison. Having one remaining Cortland apple from the farmer's market in Marquette, I simply thought I'd help B.E. get some apples from his own favorite tree.

The apples on this tree were only on the top branches, and I'm guessing the lower ones had been swiped by other apple-eaters already. So, we did what any sane apple-lovers would do. We got a 15-foot tree branch with a fork on the end and tried to "fork" the apples off the top of the tree. (Yes, that IS what sane people would do.) I had the huge fork-branch, which must have weighed 75 pounds, and B.E. was limberly pacing at the base of the tree, ready to dash to catch whatever apple I knocked free. This is not as easy as it sounds. And I wasn't so sure it was legal either. When I'd managed to pluck a couple apples, which B.E. successfully caught, I set down the big pole and counted my lucky stars we hadn't been caught.

B.E. excitedly cleaned up his apple and took a huge, crispy bite. He smiled his approval and then made a realization.

"This is a Cortland apple!" he exclaimed.

HOLY CORTLAND APPLES, BATMAN! This was a Cortland apple tree!

Well, I grabbed that pole and started jabbing at the tree with gusto. I was no longer afraid someone would disapprove. I wanted some more Cortland apples!

My arms got tired so we switched places, and B.E. knocked a heap of apples to the ground as two passersby approached the area.

I was quite embarrassed at my own behavior, scavenging for free apples from this apple tree, so I said to the approaching ladies, "Sorry, but these are the best apples in the whole world."

One of the women started to go after one of my fallen apples, as if she was going to swipe it, but it was closer to me and I quickly grabbed it.

Well, I betrayed my heart and did the smart thing by offering the women one of our foraged apples, which they both took greedily but also thanked me for them. Whew. Maybe they won't report me, or worse, mug me for my apples!

B.E. and I kept at it for a bit until he'd filled his pockets with apples and we figured we had stolen our share, however fair or unfair it was. We left the forked pole behind for other apple-pickers and drove off.

It had been partially gloomy for a majority of the day, but about an hour before the sun would set, the clouds cleared and the sky turned orange in the west, and with our quick departure from our apple-stealing spot, we decided to go somewhere to see the effects of the late sun lighting up the land.

There is a scenic overlook high upon a hill just beyond the western city limits of Munising, and it overlooks the west side of the bay and Grand Island. With the sun setting through holes in the clouds, it perfectly lit up the island in the background, while we remained shielded in the shade from our lookout platform. 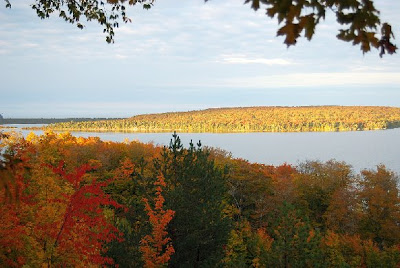 The colors look deeper when illuminated by the slanted rays of an autumn sunset. 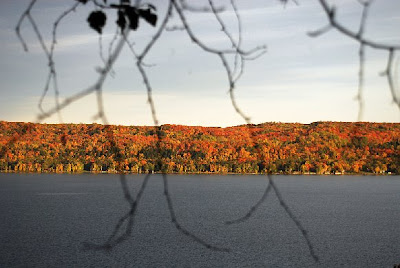 B.E. quickly ushered us off, wanting to descend and find a spot to view the sunset from another vantage point, so I drove back to Christmas again, and this time we stopped at the Bay Furnace.

The Bay Furnace is the remains of an iron smelter built over 100 years ago. Not only is it a cool structure, but the history has deep roots in the area. We were in territory where iron had long been a source of revenue and an artery of industry that created most of the communities along this area of the Great Lakes, and continues to provide sustenance to many of these regions. Towns can be tiny, with only a few hundred people, but you can tell where the iron is by the enormous docks and the huge ships that frequent them. 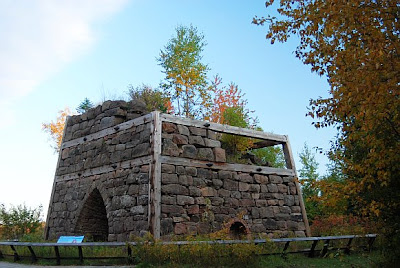 It's a bit surreal to imagine this stone structure as a kiln, particularly when it's not only in disrepair, but there are trees growing out of it. 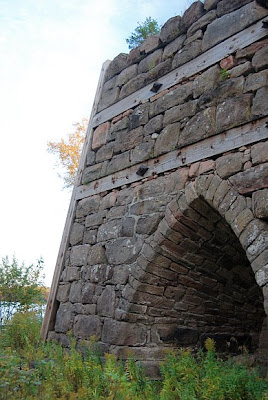 You can follow the trail down to the beach, where to this day there is still an abundance of slag among the rocks. Slag is the byproduct of the iron smelting, and it resembles opaque purple and green glass chunks. It's quite pretty, actually, but when taking shots like this from the beach, you have to watch where you walk, because the slag is just as sharp as glass if you step on it. 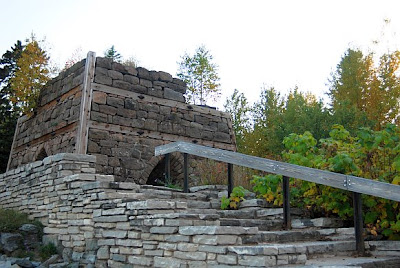 When it got too cold to sit on the stone wall, watching the last of the rays fade and listening to the waves lap, we headed back to the car. For our last night in the area, B.E. took me out to eat at my favorite restaurant, the Brownstone Inn. I don't know if it was because we'd had so much microwaved food from home for the trip or if the food there is really this good, but it seemed like the best damn meal I'd had in years. Pork loin with seafood stuffing, a salad and spicy fries: delish! And totally sweet of B.E. to do! It was a perfect day!

We went back to our room at the Superior Motel, and though the motel is nice, clean and comfy, it felt as if we were staying in a completely different town altogether. We were on the highway, so the trucks rumbled by regularly. We could not hear the water splashing or the ducks laughing at us, and it just seemed like we weren't in Munising anymore because we weren't at the Sunset. We did sleep well, though, and it was a great ending to a great day.
Posted by Doggie Extraordinaire's Mom at 6:52 PM